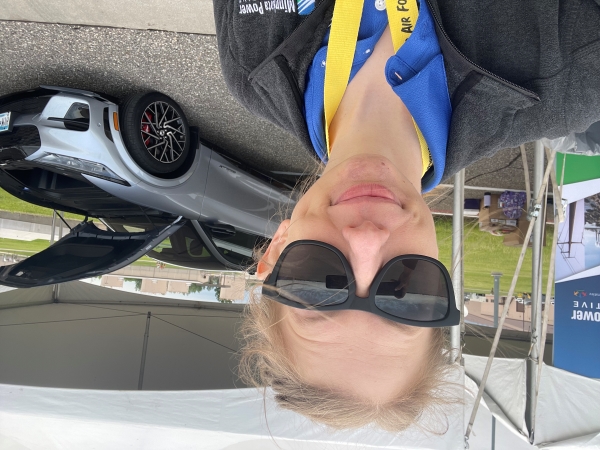 Two weeks ago I had the privilege of introducing people to the magic of EVs at the Breakfast on the Farm event in Hawley, Minn. That day was such a success that I asked our friend Lowell at Roseau County Ford if I could borrow his 2022 Ford Mustang Mach-E GT for one more summer event – one that was expecting 10 times the number of attendees.

He gave me the thumbs up, so I picked up the Mach-E for the June 18 Grand Forks Air Force Base (GFAFB) Northern Thunder Air Show.

As one of the proud sponsors of the Northern Thunder Air Show, Minnkota and its partners at Nodak Electric Cooperative were able to host a sponsor display at the event. I backed the Mach-E into its tent space and my co-worker Emily set out all of our informational materials about EV benefits and the fabulous off-peak charging program.

In the first hour of the daylong event, we had dozens of people approach the EV to check out the frunk (front trunk), ask about speed specs (“Does it even deserve to be called a Mustang?” No doubt, and let me tell you why…), and try the driver’s seat on for size. The folks were here to see the power and precision delivered by the famous Thunderbirds, so they already had an interest in top-performance machines.

Then the wind hit.

The entire tarmac turned into a dust bowl as 35-mph sustained winds blew dirt from neighboring fields into the GFAFB. Our EV information was blowing away, the National Guard was assisting sponsors with reinforcing our tents, and I had to pull the Mach-E into the grass as a just-in-case precaution.

The winds didn’t die down, but the public engagement in our booths did. And it wasn’t safe enough for a single plane to fly.

It was a bummer.

However, the event was still a success, with thousands of people checking out static plane displays, mingling with professional pilots (including the Thunderbirds!), and devouring food truck cuisine. As a bonus, our booth continued to supply attendees with a much-needed tool to defeat the wind and dirt – sunglasses.

“Minnkota saved my eyes today,” one attendee said as she walked into the wind with her neon yellow shades.

Here to serve in any way we can, ma’am.

When organizers officially pulled the plug on the event due to high winds, it was time to test how the Mach-E performed in the "unfavorable" conditions. The dust and gusts did all they could on the 18-mile drive, but that beast of a car was immovable. The heavy battery on the bottom paired with performance-grade perks really held us in place, and not one grain of dirt made its way inside the cab.

You knew what you were doing with this one, Ford.

At Minnkota headquarters, I stepped into the still-terrible wind storm and plugged the car in to prepare it for the drive back to Roseau in the morning. I was disappointed that the weather was not ideal for the day of plane flying and EV cheerleading, but there were three things that kept the smile on my face:

• We were able to introduce the concept of EVs to many adrenaline junkies.

• I was able to test an EV in some of the worst driving conditions outside of a blizzard.

• In the morning, I would be hitting the road with this baby again.

Back in the saddle again
Minnkota puts a few hundred miles on an all-electric Mustang Mach-E GT to show Hawley Breakfast on the Farm attendees what they’re missing.
Level 2 chargers coming to Minnesota communities
Halstad Municipal Utilities and Marshall County have both been awarded grants that can help them support electric vehicle drivers in northwest Minnesota.
More power, more savings
This Cass County Electric Cooperative family loves their electric transportation, but they're loving the low cost to drive it even more.
ENERGIZEYOURDRIVE
CONTACT ADDITIONAL RESOURCES About