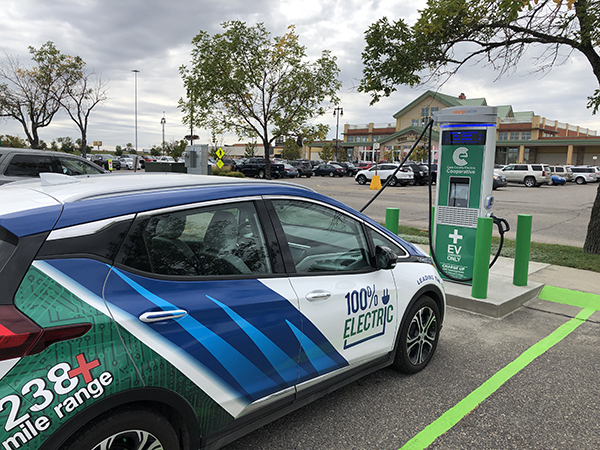 This Thursday, I grabbed my trusty Minnkota photographer extraordinaire, Michael, for a Chevy Bolt journey to Fargo-West Fargo. It would be a day full of transportation electrification, as I was set to cover two stories for our Minnkota Messenger publication. First, we would be chatting with West Fargo Public Schools (WFPS) to see how their first year went with an all-electric school bus (spoiler alert: it went very well). Then we would talk with park officer Josh Marvig about his summer patrolling with Fargo Police’s all-electric motorcycle (spoiler alert: he loved it).

Plus, I wanted try out a couple of Cass County Electric Cooperative’s three new ChargePoint fast chargers, which just went live in the past couple of weeks. So much electrification in this community!

We hit the interstate with a full battery and had no worries about range, because we knew we would have plenty of options for a power up before our return. We met up with WFPS transportation director Brad Redmond and electric bus driver Leo Rognlin, who showed us around the all-electric Blue Bird school bus and explained all of the benefits they’d experienced – savings on fuel, savings on preventative maintenance, and savings on the eardrums. You see, the bus is nearly silent, and on top of that, the students don’t have to shout over bus noise to communicate, so you have quieter kids. Double win!

Since it was on our route to our first fast charge destination – and not because I had a hankering for sweets – we stopped in to West Fargo’s original Sandy’s Donuts & Coffee Shop. As we stepped out of the Bolt, another customer approached us. The splashy car wrap design had caught his attention and he had some questions. I explained the difference between the Chevy Volt (a plug-in hybrid) and this Chevy Bolt.

Come for the donuts, stay for the EV education.

After the sugar rush, we rushed down to the West Fargo Hornbacher’s grocery store to plug into their Cass County Electric fast charger. This is a great location, because it’s right off of Interstate 94 and near a handful of food options. It worked like a dream, delivering nearly 50 kW of power right away. If our battery was more than half drained, it could have delivered even more – up to 62 kW. We charged for about 15 minutes for 30 miles of range, leaving some charge for our next fast charger test at West Acres Shopping Center in Fargo.

We pulled up to the mall parking lot space designated for EV charging (on the north side of the mall, right next to their original Level 2 charger). This is another obvious home-run location for a fast charger, because malls have shopping and food, and they’re typically surrounded by more shopping and food. We reaped the benefits of this great planning and grabbed a quick lunch at Panera Bread.

Because our battery was already nearly full, the charge was much slower as it creeped past 80%. The ChargePoint app sent me a notification when we were fully charged.

Off to the park!

We met Officer Marvig at North Fargo’s Trollwood Park, and he gave us the rundown on his Zero DSRP all-electric patrol motorcycle, which allows him to effortlessly patrol the community’s 100+ parks and recreational venues. He mentioned that COVID-19 has actually led to a national uptick in park attendance, so the bike – purchased before this park season – came just in time.

The motorcycle was a collaboration between Fargo Parks, Fargo Police, the Department of Commerce and Cass County Electric. Marvig told us that traveling 400 miles only costs about $1.60. That, my friends, is a steal.

As we parted ways with Officer Marvig, I saw him cruise up to a family in the nearby playground. A small flock of kids approached him, curiously eyeing the electric motorcycle as Marvig pulled treats from the back storage. “I need to get rid of some of these before the end of the season!” he said with a smile.

There you go, folks. Another positive community connection brought to you by electricity.