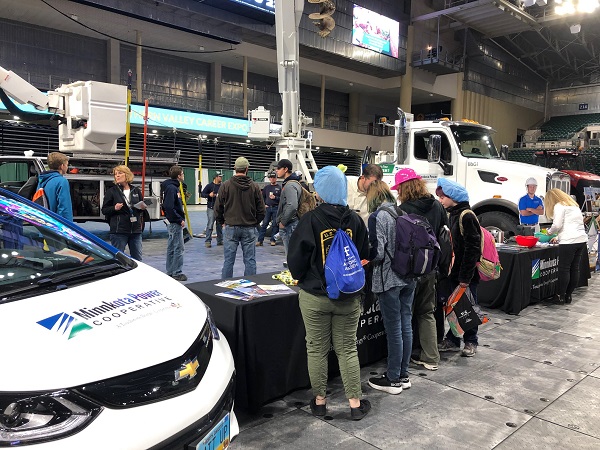 Have I told you lately how lucky I am?

I get to spend time with a lot of different groups of people during my travels in the Minnkota Bolt, from co-op advisory groups to music festival attendees. They all have diverse ideas about what the future holds – not just in terms of transportation technology, but the world in general.

If you’re looking for unique insights, what better place than the youths?

This week I experienced a one-two punch of our youngest generation. I had the chance to bring the Bolt to the Northern Valley Careers Expo on Wednesday and Rydell Cars’ Trunk-or-Treat event on Thursday, both in Grand Forks. There wasn’t much driving involved to log EV travel data, but I was able to connect with youngsters preschool age to high school age.

It’s never too early to develop a love of EVs, right?

The Bolt joined some of Minnkota’s heavier equipment at our career expo booth, where I – along with our lineworkers, engineers, an IT specialist and more – had an opportunity to chat with hundreds of area tenth-graders about all of the career paths that Minnkota and all electric cooperatives have to offer.

The Bolt was just one element of our display, but as soon as I popped the hood, it started to draw several questions. It was fun to engage their curiosity about this unique set of wheels, especially as many of them were on the journey to a driver’s license. They seemed much more excited about the idea of an all-electric car than some groups I’ve spoken to. But that’s no surprise – young minds are often open minds.

On Halloween I made the shift from career guiding to candy grabbing. It was the Bolt’s second year being involved in Rydell’s Trunk-or-Treat. The event invites local businesses and organizations to sponsor a trunk and decorate it as they see fit, and then hand out candy to a couple thousand unicorns, hockey players, hunters and skeletons (and a family of raccoons, which nearly adopted my raccoon-costume-clad self that evening).

Although most of the trick-or-treaters’ comments were about the spooky spiders hanging out in the Bolt’s trunk, many parents thought it was cool to incorporate an all-electric into the typical roster of sedans and SUVs. One dad said, “I love that they’re displaying that! They’re good for the environment!”

I don’t need Skittles – that’s sugar to my ears.