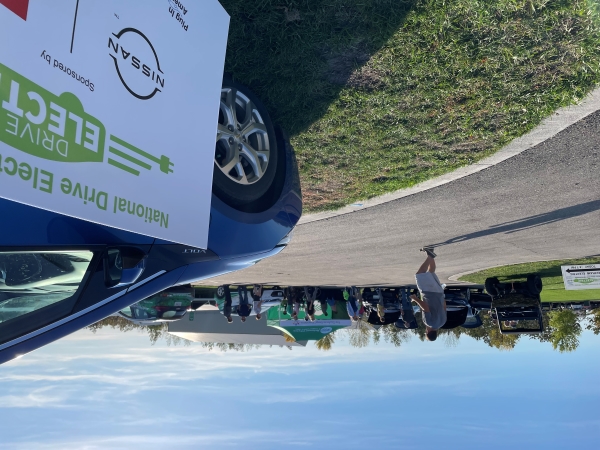 Minnkota celebrated another successful National Drive Electric Week (Sept. 25 – Oct. 3) with help from its power partners across the region. The co-op cohosted two electric vehicle (EV) events in Minnesota – one at Beltrami Electric Cooperative in Bemidji, and the other at Roseau Electric Cooperative. Both ride-and-drive gatherings were a hit, with curious attendees traveling from rural communities around northern Minnesota.

On Tuesday, Sept. 28, Beltrami Electric Cooperative invited the public to a Ride-and-Drive Electric Vehicle Event that featured a fast-charging demonstration, off-peak charging incentive information and lots of take-home goodies. Three EVs were displayed from cooperatives and utilities, but nearly 10 more came from owners around the area, who rolled into the lot with Teslas, Mustang Mach-Es, Chevy Bolts and more. But the technology didn’t stop at cars – electric bikes and an all-electric Ranger were also on hand for the more than 50 people who stopped by for the experience, including Bemidji mayor Jorge Prince.

The next day up north in Roseau, several entities – including Roseau Electric, Minnkota, Northern Municipal Power Agency and the City of Roseau – teamed up for Northern Exposure: Driving Electric in Minnesota. The community EV party drew a crowd of more than 150 people to the Roseau Electric Cooperative parking lot. Attendees signed up to drive one of three EVs, including the Mustang Mach-E available for purchase at the nearby Roseau County Ford. The waitlist filled up fast, and the EVs were leaving the lot as soon as they pulled in.

Northern Exposure also brought together charging expertise from local co-ops and utilities, travel corridor information from the Minnesota Department of Transportation and the latest all-electric technology from the hometown Polaris. On top of the electric delights, the first 100 attendees were treated to free event t-shirts sponsored by Minnkota, as well as a meal voucher for one of three on-site food trucks. Roseau mayor Dan Fabian also made an appearance, showing support for the afternoon of EV education.

By the end of the warm summer day, Roseau County Ford owner Paul Blomquist had taken the passenger seat for dozens of Mach-E test drives and talked with many more attendees about the exciting upcoming release of the all-electric Ford F-150 Lightning. Wiping sweat from his brow, he couldn’t contain his smile. “What a day!” he said.

Thank you to everyone who came out to the events and those who helped make them happen!