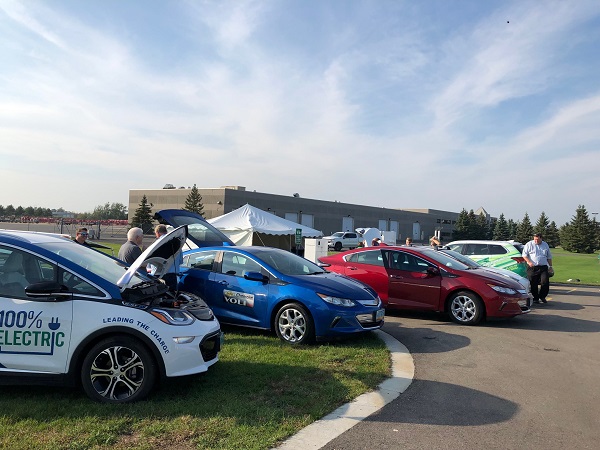 I started out a three-day road trip on Tuesday with a beautiful drive from Minnkota headquarters in Grand Forks to Beltrami Electric Cooperative in Bemidji, Minn., where they were hosting a community Ride & Drive event. The fall colors are starting to show in the trees, and that Minnesota highway journey is GORGEOUS right now.

I arrived at Beltrami’s fast charging station having traveled 118 miles and consumed a little over half of the Bolt’s battery power (33.8 kWh). I plugged in well before the start of the event so that the other EV drivers could use the coveted charging space when they rolled in. A little over an hour later, I was charged up and ready for the next leg of my trip (Fargo-Moorhead) that evening.

Now I could concentrate on the party!

Beltrami’s Ride & Drive was fantastic! About 10 EVs and plug-in hybrids showed up to the cooperative to swap driving stories, show curious guests the coolest features of their Teslas, Bolts and BMWs, and give speedy rides to those unaccustomed to EV acceleration. Attendees also had a chance to get behind the wheel of a Chevy Bolt or Volt themselves – meaning I finally had a chance to try out a Volt, which was lovely (it was great knowing you, Volty).

One exchange from two Volt owners gave me the giggles:

One couple made the trip all the way from Thief River Falls, Minn., for the event, simply wanting to learn more about electric vehicles. Andrew and Cheryl told me they may want an EV down the road and were using this opportunity to feel them out. You better believe they took a test drive!

I ran into many familiar faces at the event who have become regulars at EV gatherings like these, including Nick Thieling, who had swapped out his Tesla Model X for a Tesla Model 3. He was a crowd hit, giving rides and answering questions about range, charging and everything in between.

Beltrami’s two charging stations got a lot of use by the EV owners who made the trip, and our Minnesota Nice tendencies allowed everyone a turn at the plug. By the time the event wrapped at 7 p.m., we were all charged up with electricity and extra knowledge of the EV growth in the area.

With a nearly full battery and a belly full of donuts and ice cream (oh yeah…kudos to Sam and Angela for planning MY kind of EV event), I left Bemidji around 7:45 p.m. for the drive to the ZEF fast charger in Moorhead, Minn. My buddy Bob from Cass County Electric Cooperative had given me a heads up that the station now needed a credit card swipe after being free for many months. That’s okay by me!

The drive through the backwoods of Minnesota was refreshing (and very efficient on my part, if I do say so myself). The sky was starry, the wind was minimal and the roads were fairly quiet.

But the bugs were bad. Really bad. Bolty definitely would need a wash.

After 134 miles of country driving, I plugged in at the Moorhead fast charger a little after 10 p.m. Unfortunately, all of the coffee shops and restaurants had just closed – no Starbucks for me this time around.

I needed to kill about an hour to charge up before heading to a friend’s house in Fargo to stay for the night before my next day’s trip to Bismarck, so I popped into the nearby gas station for some chips, sat back in the Bolt and caught up on some emails on my phone. By the end of my productivity, I was just about fully charged again, with an expected range of about 200 miles (with the A/C).

One rad EV event, two successful charges, and more electric stories to tell? I can already see that this is going to be a great National Drive Electric Week!