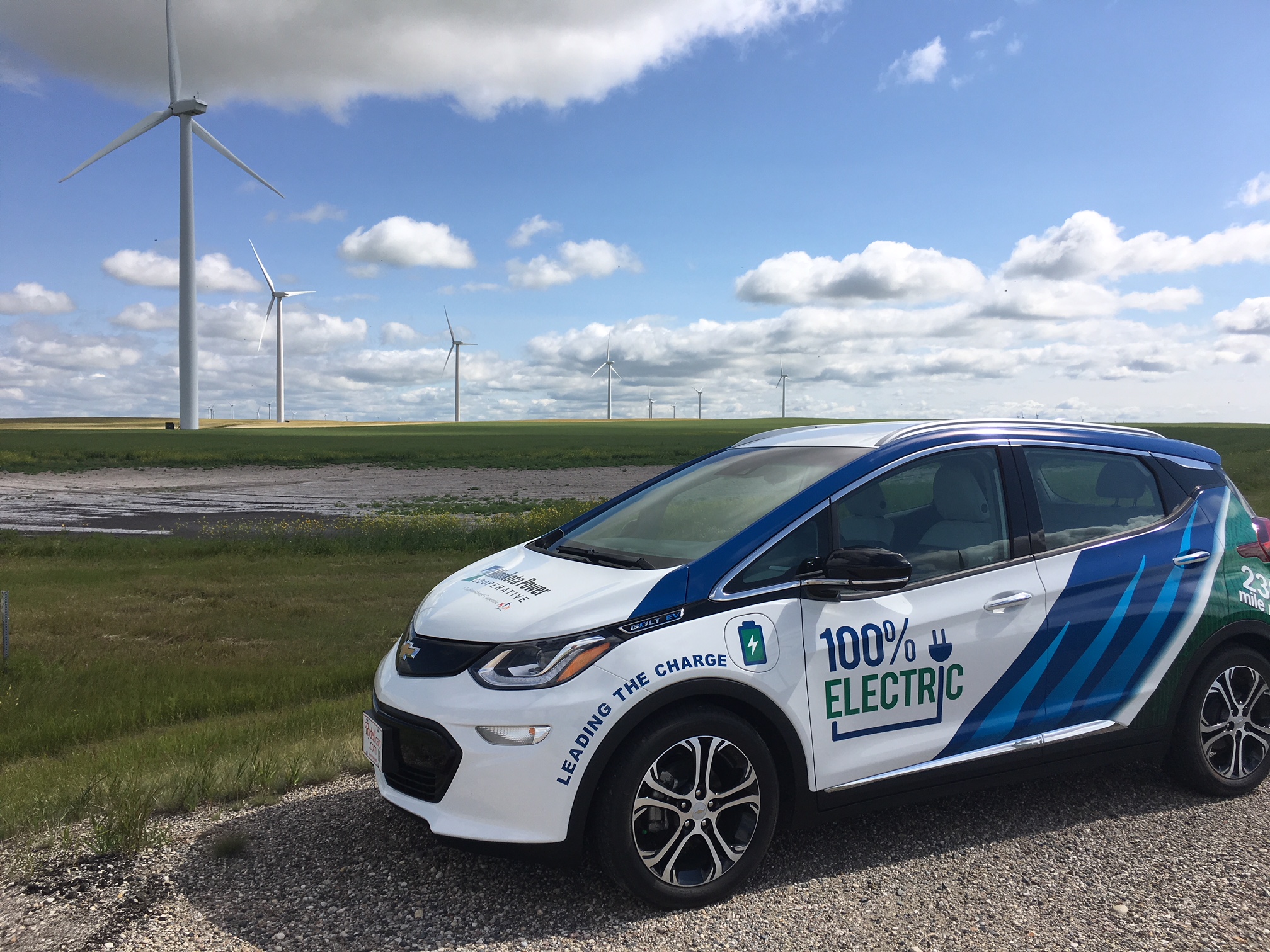 I woke up for my fourth and final day of the Co-op Hop with a little bit of anxiety in the pit of my stomach.

Today, I would be visiting two more cooperatives, and the last would be Cavalier Rural Electric, 115 miles away in Langdon, N.D. That's about 16 miles from the Canadian border, and nowhere near a Level 2 charger.

When I powered up the Bolt, I saw that my overnight charge had given me a full 261-mile battery expectancy based on the efficient driving I had done yesterday. That alleviated some of my fear. But I'm a planner and a realist and knew that this anticipated range likely wouldn't hold up, especially with the highway driving ahead. But, with my trusty 120v adapter tucked in the cargo area, I buckled up and made the quick hop over Interstate 29 to Nodak Electric Cooperative in Grand Forks.

I was greeted by Nodak's two Blaines (Thompson and Rekken, both great guys) and their colleague Gretchen. Right away they said they had been following my blog and peppered me with questions about the trip and how the Bolt had been holding up in tricky charging locations. I was honest and told them I had been incredibly lucky on my journey. Or maybe my planning was just that good.

They rounded up some more teammates and we all went out front to check out the car. Because of the extra confidence the hefty overnight charge had given me, I let "the Blaines" take a couple of quick test drives around the parking lot, knowing I would only lose a tiny bit of charge. I told them I would have the Bolt back over for some extended test drives when I didn't have a 230-mile journey ahead. :)

After they kindly indulged me with a silly photo shoot (Quickly becoming one of my favorite parts of the Co-op Hop experience), Nodak Electric sent me on the road to Langdon. As soon as I hit Highway 2 heading west, the confidence in my charge plummeted.

That wind. Oh, my gosh, that wind.

I was driving straight into the gusts. I watched in horror as my power held steady in the 18-20 kW range, much higher than the 10-12 kW range I had come to expect at my speed. My mileage quickly ticked down lower and lower, and my efficiency meter slipped from high green to low yellow. I turned to head north to avoid the straight wind and ran right into rolling hills -- just the kind of terrain you don't want for energy conservation.

I thought I wouldn't have to deal with hilly terrain in eastern North Dakota!

After white-knuckling it for 100 miles, I came across the Langdon Wind Energy Center. The backdrop of the blue sky was beautiful and I had to stop and snap a photo (see above). The 379-megawatt wind farm is owned by NextEra Energy Resources, and it's one of the farms from which Minnkota gets its wind energy. And it was certainly windy enough today to get those 250 turbines moving.

I pulled into Cavalier Rural Electric having used 34 kWh over 120 miles. I had 94 miles "in the tank" and knew that wouldn't be enough to get me home. I plugged into the 120v outlet outside the building to get a few miles back over the couple of hours I'd be parked there. But I was already brainstorming where I could stop on my drive back in case of an emergency.

Cavalier Rural Electric's Laurie Landsem had pulled together a great open house for the community to come take a look at the Bolt. She had even put an announcement in the local paper, and a member had whipped up a few batches of her famous cookies to serve (monster, chocolate-caramel and sugar, all Kaylee-tested and approved) to serve with lemonade.

We had a great turnout and a reporter from local paper dropped by to ask me some questions about electric cars and the Co-op Hop. The employees, board members and consumer-members I spoke with were realistic about the challenges EVs face in their rural area, but were happy to hear about the state's growing charging infrastructure and grant opportunities.

As the event wrapped up, I realized my battery would need some more charge before the drive home, so I decided to walk around and explore this community of 1,700 people.

Even though I already had a belly full of cookies, I had to hit the Bread Pan, which I heard was known for its buns and doughnuts. I walked in and smiled at the plaid shirt-clad regulars gripping ceramic mugs and swapping stories, and I was helped at the counter by a woman whose warmth could power the ovens in the back.

Oh, man. I already loved this place and I hadn't even had the goods.

I walked out with a black coffee, a Homer Simpson-inspired pink sprinkle doughnut and the determination to make it the 115 miles home on the 112 miles I now had remaining in my battery (18 miles gained over 3.5 hours plugged in).

Guys, the EV gods smiled upon me. I had the wind at my back the entire drive back to Grand Forks and didn't have to rely on a backup plan of stopping in Larimore, N.D., for a few more hours of charge. Sure, I was also driving well under the Highway 2 speed limit (I embarrassingly had several "Oversized Load" semis pass me), but I was on a mission.

Just before I arrived at Minnkota, my energy meter turned orange, indicating the Bolt was in dire need of a charge. But I parked and plugged in with 39 miles left and a heavy sigh.

Between travel and test drives, I had taken the Bolt 866 miles over four days. I had used 206 kWh of energy. I had charged in nine different locations at three different levels (Level 1, Level 2 and DC). I had spoken to dozens of people at co-ops, events and pit stops, and had felt the immense generosity of the good folks in our service area. And, honestly, I had built a kinship with an electric car...my baby Bolt.