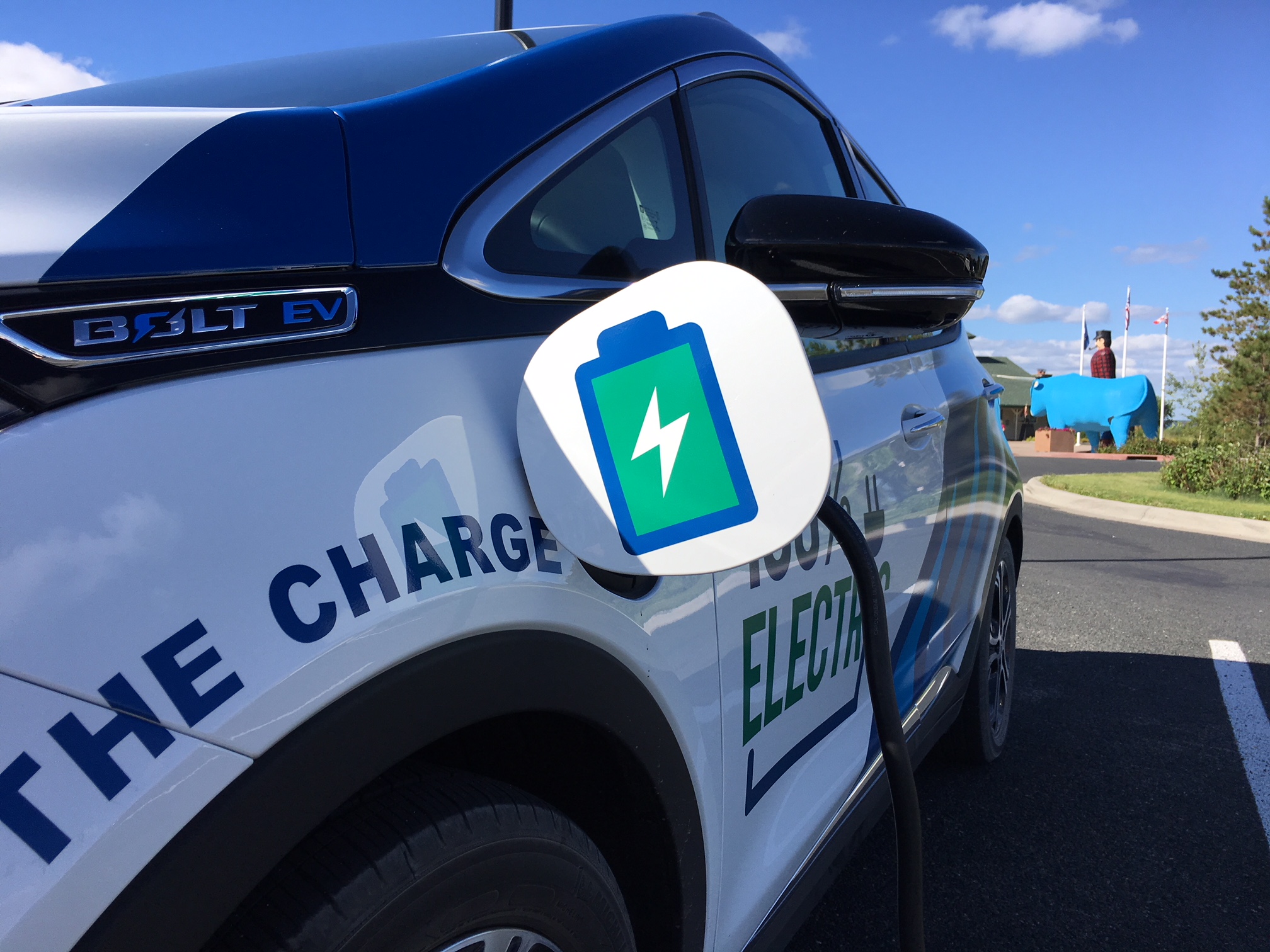 And we're just getting started!

The first day of the Minnkota Co-op Hop was an absolute blast, and I'm excited to continue the journey over the next three days. But before I get ahead of myself, let me tell you about the adventure so far.

I left Minnkota headquarters in Grand Forks early Monday morning with a fully charged battery and an expected 254 miles of range (with the climate control off). Not to brag, but I think the high range was based on the efficient driving I've been doing over the past week. My goal was to keep that up.

My first stop of the day was in Halstad, Minn., to visit the great crew at Red River Valley Cooperative Power Association. I caught them right before their board members were set to meet, and we had some time for a couple of test drives and a look under the hood. For those who took a turn at the wheel, the reaction was the same: "Man, does this thing have some power!" Between the 200 hp engine and the unbeatable torque (try 0-60 in under 7 seconds), people are often caught off guard by the Bolt's kick. And that includes me.

From Halstad, I headed south to Cass County Electric Cooperative (CCEC) in Fargo, N.D. This co-op is no stranger to the Chevy Bolt -- they added one to their own fleet earlier this year during the cold winter months. This would be an educational stop for me, as I asked questions rapid fire: What challenges had they run into? Where were the newest charging stations popping up? How close had they cut it on a low charge?

The answer to that last one, I kid you not -- ONE MILE LEFT OF CHARGE. Terrifying.

For the half hour I was picking their brains, I plugged into CCEC's Level 2 charger and gained about 12 miles of charge. It wasn't much, but I knew my next stop would be Fargo's West Acres Shopping Center, where CCEC has sponsored a free, public Level 2 charger. As the Bolt charged, I charged up with a delicious sandwich (looking at you, Panera Bread) and the company of a Fargo friend (looking at you, Betsy).

An hour and a half and 36 additional miles later, I was on the road again to Mahnomen, Minn., to drop in on our friends at Wild Rice Electric Cooperative.

I pulled into the parking lot with an anticipated 117 miles of charge remaining, which was plenty to get me to another co-op stop and my ultimate destination of the day in Bemidji, Minn. That meant offering some more test drives would be no problem! A couple of Wild Rice leaders jumped at the chance to take the Bolt for a spin, and many took a quick break from their duties to come take a look.

They were rewarded with EnergizeYourDrive.com sunglasses, and they pulled them off sooooo well.

One of my favorite parts about this stop was hearing all of the stories of the family connections and generations that have made careers with Wild Rice Electric and other co-ops in the region. Electricity runs in the blood here, and they are proud of it.

My final pit stop of the day was to Clearwater-Polk Electric Cooperative in beautiful Bagley, Minn. On my way, I ran into some terrain I'm not used to in the Red River Valley. The rolling hills were a blessing and a curse, as they zapped my kWh on the way up and regenerated that charge on the way down. I think in the end I came out energy even.

When I arrived at the co-op, I was met by a local newspaper reporter who had some great questions about the Bolt and electric vehicles in general. I was thrilled to talk about my experience to be shared with the Bagley community and beyond. It was the end of the work day for Clearwater-Polk Electric, but I had a great conversation with Deanna and Bruce before I buckled in for Bemidji.

I pulled in to a free charging station near the famed Paul Bunyan and Babe the Blue Ox statues for which Bemidji is known. And if you think I was going to pass up another photo opportunity, you were wrong.