Delightful day on the Greenway 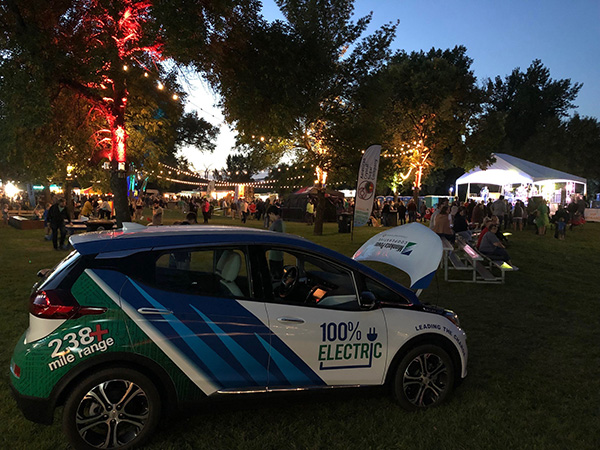 I spent my Friday afternoon down by the Red River, on the beautiful Grand Forks Greenway, taking in the crisp September air with hundreds of others from around the region. In the middle of two stages of live music, oversize lawn games and more than a dozen food trucks and other vendors, I was hanging with the Minnkota Bolt.

As a part of this year’s Greenway Takeover Festival (Sept. 5-8), I wasn’t dishing out deep-fried Oreos or radio favorites – I was serving up electric vehicle facts.

This was the second year the Bolt and I spent a day at the four-day music festival. In its third year, the event has exploded in regional popularity, and it’s a great outreach opportunity for local businesses and nonprofits.

Support the community AND talk about electric transportation all day in the sun? Yes, please.

I once again had prime parking at the front entrance, so the bright Bolt grabbed guests’ attention immediately. It also helped that I had a pile of my signature neon EnergizeYourDrive.com sunglasses to give out.

By the time the sun set and the evening headliner took the stage – yes, I jammed to the Cherry Poppin’ Daddies performing their hit, “Zoot Suit Riot” – I had connected to so many attendees of all ages. My favorite moment of the day was chatting with a gentleman about the battery system that runs along the underside of the car. I began a conversation with the next group waiting with questions and when I turned back, that gentleman was now teaching another person about the car’s batteries.

I could tell that people were becoming more and more aware of electric vehicles and their place in our transportation landscape. Last year, many of the questions I would hear were about the price and range of the car. At this year’s festival, the conversation seemed to shift to how quickly public charging stations would start to pop up along major travel corridors, what new models would be coming out next year, and how low the price of batteries would drop.

These folks already had a grasp on the EV basics – now they had their eyes on the future. Through local education opportunities like the Minnkota Bolt’s visits to fairs and festivals, regional programs like Drive Electric North Dakota and Midwest EVOLVE, and national outreach like the new nostalgia-based “Normal Now” campaign from Electrify America, the public is getting comfortable with the idea of EVs on the road.

Hopefully, that translates to getting comfortable with the idea of an EV in the garage.