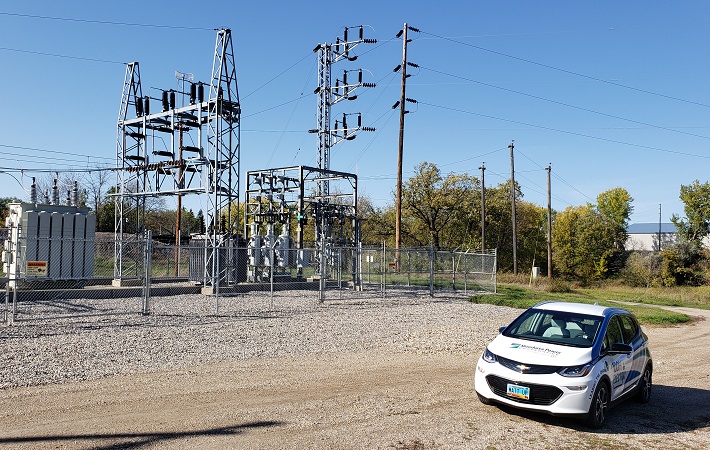 The Minnkota Bolt went to work on Tuesday with a multi-stop journey around northeastern North Dakota.

Senior Power System Operator – and EV enthusiast – Terry Peoples decided to take the car to six substations and a switch in the Grand Forks, Lakota and Park River areas of the state. Terry is working on a project for Minnkota System Operations, and he figured this would be a great opportunity to get the electric car out into those communities.

During a stop in Park River, he caught the attention of some folks who were interested in how the car actually charged.

“They assumed it would have to charge at a station and never assumed it could be charged anywhere electricity was available, like your own garage overnight,” Terry said.

Terry used 43.6 kWh driving 153 miles from rural substation to rural substation. It was a sunny, 68-degree day, so he didn’t have to use the AC or heat controls. His only challenge on the journey? Trying to keep the car clean on gravel roads.

Last fall, Terry won a week with a Tesla Model S and became a follower of the EV industry. Now, he seeks out driving experiences and technology news, waiting for the day he will have an EV of his own. He says his first one would likely be a Chevy Volt hybrid, since they are running at a great price now that they’ve been discontinued.

He still has a soft spot for Teslas, citing longer ranges, larger onboard chargers and an extensive public Supercharger Network (which is currently finishing sites in Dickinson and Bismarck, N.D.). But he notes that, at a fraction of the cost of a performance Tesla, the Chevy Bolt is a wonderful EV.

“The Bolt still makes a great vehicle for your daily commute or shorter over-the-road trips as long as you have the time to spend a few hours or more to charge along the way,” he said.