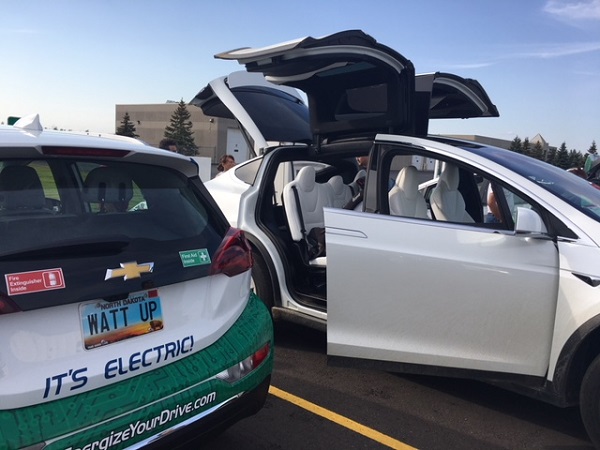 If the National Drive Electric Week event hosted by Beltrami Electric Cooperative in Bemidji, Minn., is any indicator of the fun I'll be having the next few days, I'm pumped. It was fantastic to talk to so many passionate EV owners, learn about electric car makes and models I've never seen in person, and communicate to EV newbies why the electric landscape in the Midwest is so promising.

National Drive Electric Week (Sept. 8-16) is an opportunity for communities across the country to plan events, bringing EV enthusiasts (and those interested in learning more) together to celebrate plugging in. Beltrami Electric joined the movement Tuesday evening, enticing around 50 people to stop by its headquarters. Many of those guests came in their own electric vehicles – anything from Nissan Leafs to Highlander Hybrids to three different models of Teslas.

Cass County Electric's Bob Miller and I both brought our cooperatives' Chevy Bolts from about 120-130 miles away to answer questions about our experiences with the cars, while Beltrami Electric's Sam Mason used their Bolt to give test drives. Those quick cruises were definitely a hit – I saw a lot of grins hop out of the driver's seat.

What this event showed me most clearly was the sense of community that has grown among Minnesota EV owners. I spoke with two Tesla owners who say they are involved in groups that meet monthly to chat about new advances in the technology and what they've learned on the road. They are also involved in online forms through which they say they gain inside information about new Tesla developments before they're even released to the public.

A regular gang of detectives we have on our hands.

One man that I met, Nicholas Thieling, drove his 2017 Tesla Model X 200 miles from the Ramsey-Anoka area of Minnesota for the event. Oh, my goodness. What a gorgeous vehicle.

Nicholas told me he loves these kinds of events because he can help further education about EVs from his own experience. "EVs are still kind of a weird, alien technology that some people are afraid of. They think it can't work for them, that it's scary, or that it's a hazard. But in reality, we have the safest and most fun to drive cars on the road," he said. "It's great to get out and talk about it."

I spoke with EV drivers of all lifestyles, from family men like Nicholas (yep, there were two car seats in that Tesla SUV) to college professors to retirees. They all said the same thing – they love their EVs, and they don't plan on going back to internal combustion engines.

The more these folks have the chance to share their stories over coffee and snickerdoodles, the larger their community will grow.

Check out this great news story about the event by Lakeland PBS reporter Shirelle Moore:

See you all at the next Drive Electric Week event at Cass County Electric Cooperative in Fargo! It's from 4-7 p.m. on Thursday, Sept. 13. Come find me for a free t-shirt and a pair of EnergizeYourDrive shades!