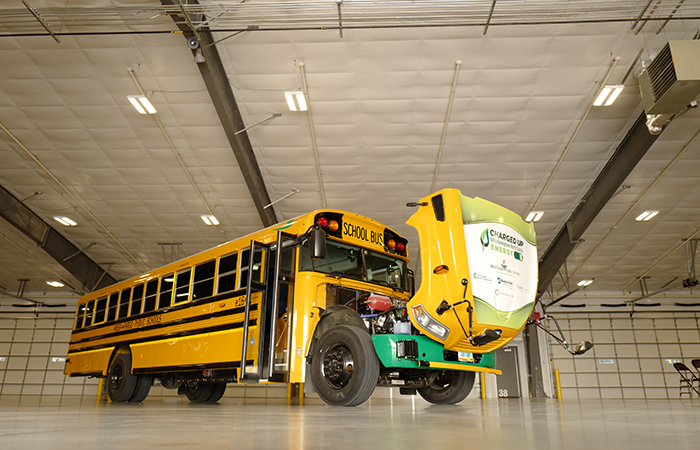 Monday was an exciting day for Minnkota Power and our friends down at Cass County Electric. Our cooperatives, along with the Coalition for a Secure Energy Future and the North Dakota Department of Commerce, would be helping West Fargo Public Schools (WFPS) cut the ribbon on their new, first-in-the-state all-electric school bus. These project partners had been working together for well over a year to make the Blue Bird bus a reality, and now it was time to show it to the public and celebrate its arrival.

Of course we were going to bring the Minnkota Bolt to the party!

I hopped in the car with my teammates, Ben and Kevin, and we set the GPS for the West Fargo Public Schools Transportation Department building. It would be a nearly 80-mile trip one way, and we had 191 miles of range (calculated from a previous trip at 75-mph speeds and climate control). It was a warm day, so we knew the air conditioning and interstate speeds wouldn't give us maximum efficiency, but we also knew the Fargo area had plenty of public charging opportunities.

We arrived at the bus barn with 93 miles of remaining range, which was less than expected. We were driving into a south wind and that took a little more power.

Even so – no worries! A quick top-off later would give us plenty of cushion to get home.

I pulled the Bolt into the garage, where the bus's ribbon-cutting would soon kick off. The Cass County Electric team also brought their Bolt, so we had a lot of electric firepower under one roof.

The bus unveiling was a blast. Folks from all over the area came by to experience the bus – local leaders, educators, lawmakers and other interested organizations. The crowd heard from representatives of all the entities who had a role in bringing this technology to West Fargo.

As Minnkota's communication manager, Ben was able to take the mic and say a few words on our cooperative's behalf. “We believe others around the region will see the success of this project, and it will start a conversation in our local communities," he said. "Someone needed to take the first step, and we’re grateful that West Fargo did that.”

After cutting the ribbon, attendees were able to board the bus for a quick trip around West Fargo. They were amazed at how quiet the bus was, and there was a lot of talk about how clean the air smelled. The 120-mile-range electric bus emits zero emissions, so riders don't experience those fumes we all remember from our high school journeys to track meets and basketball games two counties away.

Readers, I know you know exactly what I'm talking about.

Brad Redmond, transportation director for WFPS, told the tour group that this bus will cost only 9 cents per mile traveled to fuel, while its diesel counterpart costs at least 40 cents per mile. The district will also save 70-80% in maintenance costs, as the bus won't need oil changes, filter replacements or transmission tune-ups. The initial cost of the electric bus was higher, but stands to pay off in the long run.

“I hope that West Fargo Public Schools Bus e16 will prove to be a beneficial investment for our North Dakotans,” Redmond said.

“We absolutely believe that the world is going to electric,” said Blue Bird's Jim Johnson. "With any new technology, there’s an adoption period. We’re in that adoption period, where people have to see the vehicle, ride the vehicle and understand the vehicle."

That's why Minnkota is happy to support these kinds of efforts in our area, and why I love bringing the all-electric Bolt to as many communities as possible. The more people are able to experience these "vehicles of the future," the more they will be comfortable pursuing one of their own.

Like Ben explained to the crowd, "We see today that this isn’t the bus of the future. It’s the bus of now."

To learn more about the electric bus and the unveiling event, check out our story on the Minnkota Current.

Once we had chatted with old friends and made new industry connections, we decided it was time to find a place to feed the Bolt's battery and our bellies. We headed to the ZEF fast charging station 15 minutes away in Moorhead, a fast favorite for EV drivers who want a quick plug-in and plenty of lunch options. Our 30-minute charge gave us nearly 45 miles of additional range, so we had 126 miles of range for an 80-mile trip home. With the wind giving us an additional push north, we could comfortably blast the cool air (it was nearly 90 degrees – wowza) as we digested our Mexican feast.

Buses, Bolts, batteries and burritos. It was a good day.