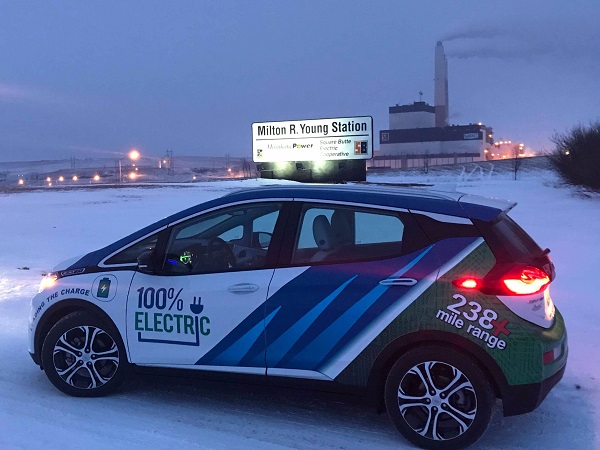 After spending a couple of weeks tucked away at Minnkota’s Milton R. Young Station near Center, N.D., it was time to bring my beloved Bolty back to Grand Forks. When I traveled to Bismarck with the EV at the end of January, I faced subzero temperatures, high winds and an uphill terrain. I was crossing my fingers that the return trip wouldn’t have me fighting the elements once again.

No such luck. As I checked out my weather app before departing Valentine’s Day morning, it hit me – this journey was going to be just as wind-whipped and just as cold.

My Minnkota colleague Troy handed me the keys after having topped off the car’s battery at the new public Level 2 charging station at the Lignite Energy Council’s Bismarck headquarters (thanks, LEC!). He told me about his experience driving the car and the great conversation it sparked while showcased at the Energy Generation Conference and at the power plant.

As we parted ways, Troy said, “I left you a winter survival kit in the front seat.” Confused, I opened the door and couldn’t help but giggle. A pair of Valentine’s Day chocolates and a pair of hand warmers sat on the passenger’s side.

Based on the cold and gusty North Dakota driving conditions that the car had been facing, my fully charged battery anticipated I would get 122 miles of range, the lowest I’ve seen. It would be a 102-mile drive to Jamestown before I could charge again. I knew I didn’t want to drive without a good 68-degree cabin heat – it was 4 below zero with a 25-below wind chill – so I opted to get my full efficiency by driving 60 mph instead of the marked 75 mph to Jamestown.

I could tell by the snow blowing over the interstate that the wind was coming from the northwest, ever so slightly at my back.

Score! I wouldn’t be driving straight into it!

I was able to “keep in the green” on my efficiency gauge the entire drive to Jamestown, maintaining around 22 kW of energy use. I arrived at the convenient R.M. Stoudt Quick Lane Level 2 charger with 32 miles of remaining range. Upon plug-in, the Bolt noted I would have a fully charged battery by 6:45 p.m. – a full eight hours into the day.

Ooof. I would have some time to burn.

I checked in with the fellows at the Quick Lane’s desk to let them know I would be charging outside for a while. They said they only had people stopping to plug in every once in a while and that the charger was mainly used by the owner, who ALSO DRIVES A CHEVY BOLT. Cool beans!

I knew I could get a lot of work done during my charging time, so I called a taxi to bring me to a friend-recommended local favorite – Babb’s Coffee House. My driver, Doug, was incredibly inquisitive about the all-electric car, asking me how it was handling the day’s brutal cold and how well it stayed warm on the inside (just fine with both). The charging time made him a little skeptical, but I explained that battery technology and range was getting better all the time, with companies investing more and more into those innovations. Plus, it gave me a chance to spend some time checking out communities like Jamestown!

I’m not sure I convinced him, but darn it, I did my best.

After refueling at Babb’s (order the Bellevue sandwich for guaranteed bliss) and checking off some items on my to-do list over the next few hours, it was time to get on the road to Moorhead. Next time I come through Jamestown, when it’s warmer and outdoor walking isn’t a health concern, I want to plug in at the Level 2 chargers at the University of Jamestown and/or the National Buffalo Museum to take in more of the local culture and sights.

Even after eight hours outside, the heated seats and steering wheel were immediately toasty and warm cabin heat was blowing within a couple of minutes, which is a near impossibility with a combustion engine. Bless that battery power!

The 96-mile stretch to Moorhead was much like the first leg of the trip in terms of temperature and wind, so I knew what to expect and planned my speed and climate controls accordingly. I arrived at the ZEF fast charger with 45 miles left of my anticipated 136-mile range (37.8 kWh expended). For the first time at this charging station, I saw a kindred EV plugged into the Level 2 pedestal next to the fast charger. I was thankful the Nissan Leaf wasn’t using the 50-kW port. That would have slowed me down quite a bit.

I grabbed a burrito bowl for dinner (as I’ve said before, I thoroughly appreciate the variety of food and drink choices at the Moorhead station) and then checked to make sure the electricity was still flowing. It was, and I still had about 30 minutes until the car would be charged to 80 percent. That would be more than enough to get me to north to Grand Forks.

But here’s where the story turns south.

I spent the next half hour in Starbucks with coffee and a great book and then packed up to get driving. But as I walked up to the car, panic set in. The green charging indicator wasn’t blinking. When I opened the door, the dash read, “Unable to Charge.” I checked the charging station and found out it had stopped working 30 minutes ago because of an internal issue (because I’m unsure of what exactly caused the issue, I’ll be doing some further research).

I re-engaged the charger and tried again, and the connection seemed to be working. But I was worried it would stop on me again, so I pulled my winter hat down tighter, fired up the hand warmers Troy gave me and took a seat in the chilly car. I would keep an eye on the charge until I had enough to get me comfortably home, knowing I would be driving into a north wind.

After about 20 minutes I had 100 miles of total range. I felt good about that. The wind was strong, so I took it slow on the interstate to conserve power. The Bolt and I got to Grand Forks with 17 miles remaining, warranting a blaze orange power gauge.

We did it! There were hiccups along the way (I like to call them learning experiences), but I finally had the Minnkota EV back home.

My Valentine’s Day date is more of a homebody when it’s cold outside (long range really takes a hit in the depth of winter), but his heart is warmer than anyone’s (the instant heat of that battery is a treat) and he’s rock solid (the weight and placement of the battery makes handling on snow and ice a non-issue). Plus, he made it so I didn't have to pay for a thing (I utilized free charging stations along the entire route, so not a penny was dropped on fuel).

Love is in the air, folks.