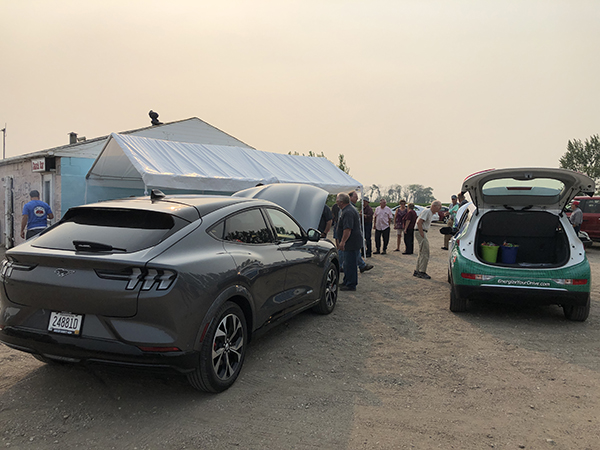 From a parade in Thompson, N.D., to an invitation to Warren, Minn., the Minnkota Bolt is on the small town circuit this summer!

On Tuesday, Bolty and I headed out to the PKM Electric Cooperative annual meeting, held for the second year in a row at the locally famous Sky-Vu Drive In movie theater. Last year, the venue was PKM’s way of safely holding its essential business meeting and gathering during the COVID-19 pandemic, using the open air and the drive-up process to mitigate the spread of the virus. The meeting was not only pulled off successfully, but the entire event was a community hit, and folks called for an encore this year.

And boy, did PKM deliver.

As I pulled up to Sky-Vu, I could see a bright grouping of bouncy houses that event coordinators added to this year's roster of attractions, as well as the smoky haze rising from the burger-filled grill. This was a regular picnic party – with free admission to that night’s drive-in movie for good measure.

Moments after I parked the Bolt near the food line (what better placement, right?) an all-electric Mustang Mach-E pulled in next to me. It was our friends Paul Blomquist and Kristin Eggerling, owners of Roseau County Ford and C&M Ford in Hallock! Together, we would be showing event attendees all the features and benefits of the two EVs.

Even with all of the excitement surrounding us, we had dozens of people approach us throughout the evening to learn more about the cars, take a seat inside, and talk to us about our experiences driving them. Paul has only had the Mach-E for a few months, and he's already brought it to several communities and events between Cavalier, N.D., and Minneapolis. He says its been a treat riding along with both prospective buyers and EV skeptics during test drives and seeing them all light up behind the wheel.

I've been one of those test drivers. And the car is DEEElightful.

After approximately 300 people dished up their dinner and chatted with us about range, power and EV models to come (you better believe the all-electric Ford F-150 Lightning was all people were talking about), PKM and its members got down to business. They held their meeting by voting through car honks, which was incredibly effective and incredibly fun to witness. When that was wrapped up, they moved on to the real joy of the evening – the doling out of door prizes.

Paul, Kristin and I opted to skip the evening showing of Boss Baby 2 (a little removed from my typical genres of choice) and head back to our respective communities. The warm, wind-free weather and 60-mph highway speeds made my drive to and from Warren ultra-efficient. Even though I had driven a total of 73 miles roundtrip, my expected range only dropped by 48 miles. I still had a whopping 145 miles of range when I rolled in to Minnkota.

I could have headed back to catch Boss Baby 2 with all that battery power. But I let the credits roll on what had been another fantastic day of EV education.