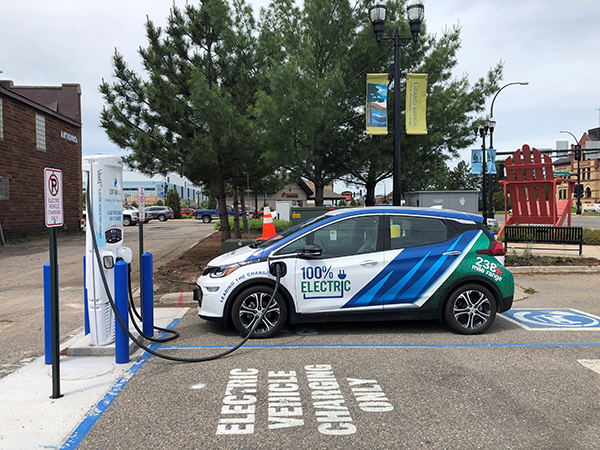 And that’s a great thing, especially when they’re not hard lessons.

Last week, the Minnkota Bolt and I packed up for a four-day Minnesota Rural Electric (MREA) conference at Sugar Lake Lodge, just southwest of Grand Rapids. This MREA gathering would bring together member services and communications representatives from co-ops around Minnesota and its neighboring states. The agenda was full of speakers on topics like EVs, member engagement, social media, annual meetings, battery storage and so much more.

I was charged up, and so was Bolty.

It was a 190-mile trip one way to Grand Rapids. I had an estimated 197 miles of range, so I thought it would be best to stop in Bemidji, Minn., to charge. The city has two DC fast chargers and several public Level 2 chargers, so I hit the fast charging station I hadn’t yet tried out – a ZEF station located at City Hall, right in downtown Bemidji.

As I swiped my card and plugged in (flawless connection), I was approached by the city’s planning director, Jamin Carlson, who had spotted me from inside. “Is everything working OK for you?” he asked.

Wow. You don’t see that kind of welcome everywhere.

It turns out Carlson also has an EV (a Tesla), and he isn’t the only one on staff with a plug-in. He said he was thrilled for the city to partner with ZEF and Otter Tail Power to make the fast charger happen, and has been excited to see all of the new charging options that have emerged in town over the past couple of years.

After our Bolt-side chat, I decided to use the remaining few minutes of my charge to take in two of my favorite downtown Bemidji pit stops – Raphael’s Bakery, which is just around the corner from City Hall, and the Paul Bunyan and Babe statues, which were just a five-minute walk away. A sweet-tooth tourist’s dream.

I returned to the Bolt 40 minutes later with the (more than) 80% charge I was looking for, and then headed out again for my next stop, 70 miles away in Grand Rapids. I wouldn’t be in need of an immediate charge, but I wanted to test out the new ZEF fast charger that had been installed there last year.

Like in Bemidji, the charger (located in the Pluemer’s Fine Furniture parking lot) is nestled near the city’s downtown. This was my first time in Grand Rapids (I know, that’s crazy for a native Red River Valley dweller), so after I ran my card and plugged in (new charger test SUCCESSFUL), I took the next 20 minutes to stroll around. It was decided – I would definitely make my way back to town on a work-free trip.

It was just a quick hop to Sugar Lake Lodge from Grand Rapids, and I wasn’t even the first EV to arrive. Four other attendees would ultimately drive electric, two from deep southern Minnesota in Teslas, one from Bemidji in a Bolt and even one from South Dakota in a Nissan Leaf!

Electrification was a major discussion point of the conference. We learned about co-op charging and rebate programs, fast-charging infrastructure collaborations between states and the latest EV models available to the public. We were also joined virtually by Lisa Teed, Mustang Mach-E brand marketing manager, as well as a real-life Paul Blomquist, owner of Roseau County Ford and C&M Ford in Hallock, Minn. The duo described how Ford is using its newest EV models (including the F-150 Lightning) to truly lead automakers into electrification.

When the conference wrapped up on Friday, my brain was bursting with new knowledge. I had swapped stories with other EV champions and taken notes on the opportunities and challenges ahead. BONUS: I had the chance to plug in at two new destinations that are sure to see me and the EV again in the future.

The lakeside retreat was refreshing – but the content of the week was energizing.