Power of the Potato 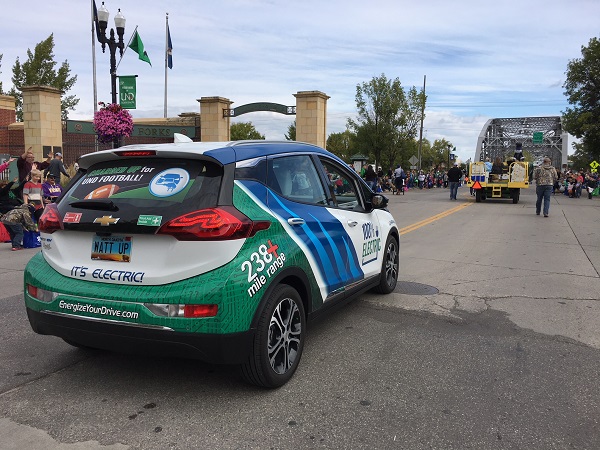 This weekend the Minnkota EV marked its fourth parade of the season, but this one was special. This time, we were celebrating UND Homecoming Week, which was combined this year with the annual Potato Bowl festivities – double the theme, double the fun. The University of North Dakota is alma mater to both me and my communications team comrade Ben, so we threw on our Kelly green, decked out the car with a "Charged Up for UND Football" window cling and made our way to downtown Grand Forks.

We learned an important lesson while meandering through the floats and people lining up on neighborhood streets in parade preparation. This car is almost too quiet. People standing in the roadway couldn't hear us creeping up behind them, so I had to shout a few polite excuse me's from the passenger side window. Fortunately, we got into position without incident.

When the parade finally started to roll, we were met by hundreds of fans packing both sides of Demers Avenue. What a crowd! I looked at our candy stash and wondered, "Is this enough to sugar the masses?" Spoiler alert: It was.

From the the driver's seat, Ben heard a lot of curious shouts from the crowd, including calls like, "All electric! Awesome!" and "I didn't even know that was a thing," and a few simple iterations of "Cool." We were definitely getting some attention, even with clowns ahead of us and a few adorable dogs behind us.

The parade went by incredibly fast and I had to run to keep up with the flow, throwing candy into sacks and grocery bags like a sniper. After a few city blocks of sprinting and peppering families with Snickers, Starbursts and Skittles, my personal battery started to wear down before the Bolt's (maybe I need to install some regenerative braking in my sneakers...).

It felt amazing to connect with our community for such a special event. Minnkota thanks the Kem Shriners for allowing us to participate!