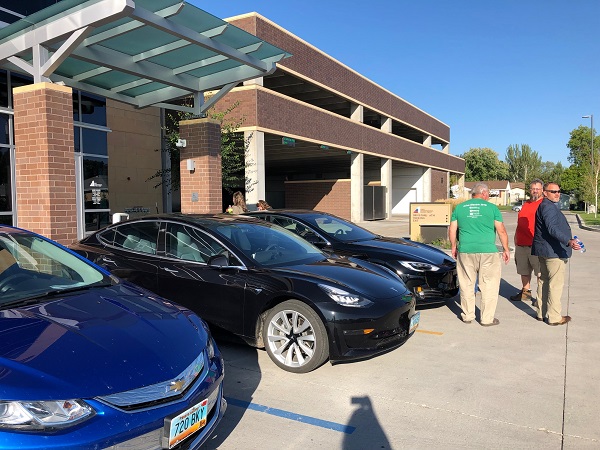 I woke up to a top-notch Wednesday morning in Fargo – sunny skies, warm air and the Minnkota Bolt charged up and ready to head 187 miles west. The second day of my National Drive Electric Week road trip was about to begin, with a straight shot down I-94 to Bismarck. I would be a part of a DriveElectricND event panel discussing the future of electric vehicles and charging infrastructure in North Dakota.

Nothing could curb my excitement!

Then I looked at the wind forecast for the day.

It was going to be a gusty one, and the Bolt would be driving straight into it for about three hours. But I had a nice charging stop planned in Jamestown, N.D. (halfway between Fargo and Bismarck), so I wasn’t overly concerned.

I left my friend Betsy’s house (thanks for housing me, buddy!) with 199 miles of range, which, on a windless day, could get me all the way to Bismarck. But I like to have some energy cushion, both for peace of mind and battery health. I would stop at the R.M. Stoudt Quick Lane service center in Jamestown to use their Level 2 charger (they’ll kindly let anyone use it if you just check in) and make the five-minute walk to Perkins for a sandwich and some work time.

The wind worked the Bolt a little more than I thought it would. My energy expenditure hung between 22-28 kW the entire 96-mile stretch to Jamestown, and I was driving about 10 mph below the 75-mph speed limit. Usually, I would be experiencing a 15-20 kW rate at that speed.

I pulled into Jamestown with 67 miles of range left when I was expecting to have around 90 miles left. But I had planned ahead for a situation like this, carving in a little extra charging time if necessary.

Today, it was necessary.

I ended up getting an extra 30 minutes of work done at Perkins as I waited for the car to get back to at least 125 miles of range (25 more than I would need for the remainder of the day). I double checked the mathematics and physics involved in the balance of speed, wind, distance and arrival timing.

Yep, this would work.

I encountered the same hefty wind and hills on the 100 miles to Bismarck. I pulled up to the 1st International Bank just in time for the start of the event, 18 miles of range left in the battery.

The DriveElectricND event brought together utilities, policymakers, community leaders and EV owners for an open discussion on the current state of EVs in the state and potential steps for further adoption.

My panel of electricity providers and an EV owner led a great conversation on what is keeping people in our region from buying EVs (mostly range anxiety and winter driving concerns), what charging incentives are currently offered and what movements could be made to expand public charging infrastructure.

Our panel was followed by a roster of lawmakers, city/state leaders and transportation officials. There was robust back-and-forth about choosing the right charging station technology and placement to drive economic development, as well as finding the correct cost-benefit balance to drive adoption while keeping the taxpayer in mind.

Linda Sitz, Strategic Innovation Manager for the ND Department of Transportation, mentioned that in little over a year, the number of registered EVs in the state had risen from around 140 to 187.

“That’s exciting,” she told the crowd. “That means it’s growing in North Dakota.”

After the panels, I was able to chat with a few local Tesla owners and others who are working passionately to fill the state’s EV gaps, both in physical infrastructure and general public education. These are passionate people, and I feel lucky to be a part of their collective effort.

It was now time to cruise a couple miles north to my lodging for the night – the Best Western Roosevelt Place. It’s the only hotel in the city with a Level 2 charger that I know of, so the choice was easy. The front desk turned the power on for me (guests only!), I plugged in and I wished the Bolt a good night.

We’re on the road again tomorrow, Bolty. Cass County Electric – we’re coming for you! Save us a spot at your EV Tailgate Party!