Save on EV charging with off-peak 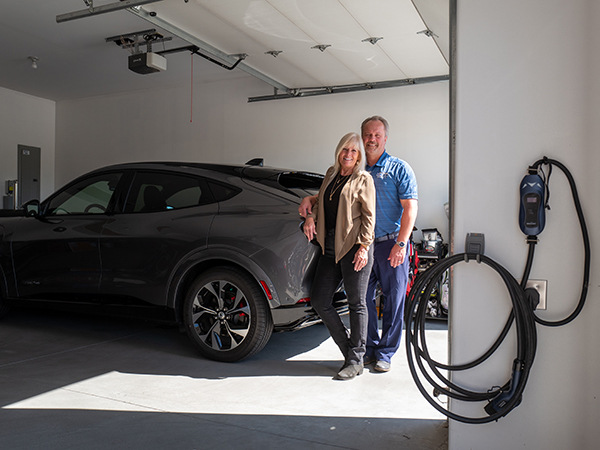 It’s safe to say Tony Telken knows cars. He’s the service manager at a Grand Forks Ford dealership, so he understands what makes a well-oiled machine. He also understands some of the best machines don’t needs oil. Or gas.

Early in 2021, Tony and his wife Tracy became the owners of an all-electric 2021 Ford Mustang Mach-E. They were one of the first 5,000 in the country to reserve one, allowing them to acquire the coveted First Edition model.

“Everything you read about it is true – it’s spunky, and Tracy is a spunky driver,” Tony said with a nod to his wife.

“Just a smidge,” she replied, smiling.

By the time the electric vehicle (EV) rolled into their garage, these Nodak Electric Cooperative members were set up to plug in. Tony had called his cooperative after reading about their off-peak EV charging program and rebates, and Nodak sent a representative to the Telken home to see what they might need in their garage. The couple purchased a charger and an electrician stopped by to route the right wiring. It was a fast process, and the cooperative’s $500 rebate took care of the entire cost of the charging unit.

With a 250-mile range, the Telkens only have to charge the Mach-E once a week. They can do that overnight when electric demand is lower, earning them the reduced off-peak electric rate – approximately half of the standard rate. They barely even notice it on their bill.

“A tank of gas at today’s rate would cost us about $50. And we don’t have that anymore. We’ve probably paid that much in electricity the whole time we’ve had it,” Tony said. “It’s huge savings.”

The Telkens’ EV has already conquered the Grand Forks winter. Each wheel on the all-wheel-drive model has its own electric motor that determines how the car should react. “The traction has been fantastic in the snow. You don’t sit and spin. You GO,” Tracy said. “I had that fear before, and I love it.”

Tony knows auto manufacturers like Ford have spent a lot of time and investment perfecting EV technology for every kind of driver – from vehicle service managers to first-time drivers.

“It’s way easier than you think, and the investment is minimal. It’s so nice to drive right by the gas pump. Now we just go to buy lottery tickets,” he joked.