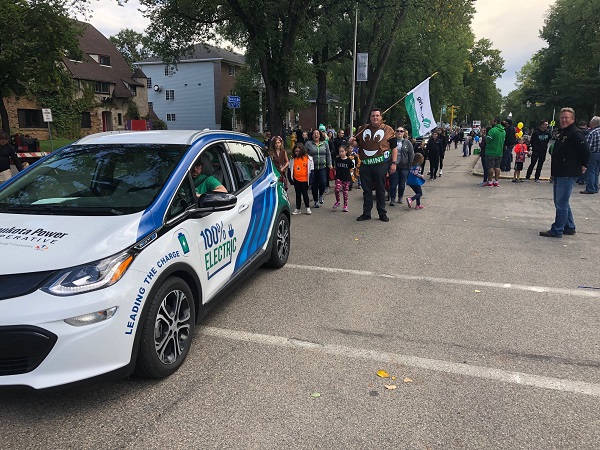 “One hundred percent electric? That’s cool!” yelled a young fellow decked out in UND green, hugging the curb of University Avenue in Grand Forks. He was one of the first of hundreds of kids to get candy from me in Saturday’s Potato Bowl parade, the annual precursor to UND Football’s athletic celebration of potatoes.

Just kidding. They’re more so celebrating football, school pride, victory – those things. Potatoes in the form of french fries and chips are a bonus.

My communications coworker Ben took the wheel of the Bolt for the parade, nestled between the Grand Forks City Band and the local Girl Scouts troop. Hundreds of people lined the street to see more than 120 floats, bands, dance groups and unique entrants like ours.

Since I was running alongside the EV with a bowl full of chocolate bars and Nerds, I heard a lot of “Can I have a Butterfinger?” and “Candy, please!” Ben, on the other hand, picked up on more of the inquisitive crowd comments, intrigued that this car ran on no gas whatsoever.

We made it through the parade without running out of candy and barely used any of our battery power, feeling good that many more people had seen how normal an EV can be – at least, those that aren’t wrapped in Minnkota logos, web URLs and bright graphics.

From the parade, we drove straight to Rydell Cars to stage the Bolt for the next day’s 14th Annual Benefit Car & Bike Show. Our EV had prime parking inside the showroom, between UND’s student-built Formula SAE race car and the Dippin’ Dots stand.

When I showed up the next day for the event, dozens and dozens of hot rods and classic cars were already checking in, wrapped around the front of Rydell and down the block. They were beautiful!

One of the organizers I spoke with said they had at least 400 registrants. That’s fantastic news, since the proceeds of this year’s show will go to the Grand Forks Foundation for Education. Last year, the show raised more than $93,000 for the Grand Forks Veterans Memorial Park. Go Rydell!

Because this was a crowd of car enthusiasts, they had a lot of great questions about the Bolt. Some were more optimistic about the technology than others. When I asked one gentleman if he had any questions about the car, he responded, “No! Ick!” and pointed at the Corvette car club emblem on his shirt.

You guessed it. Impressed.

I had a great conversation with Lonie from Grand Forks who has owned two Chevy Volts since 2011. He adores his car and has become an advocate for electric transportation. He shared a sentiment that I loved that I will slightly paraphrase: “The car does everything for you … it almost has a soul.”

I also had a fascinating chat with a taxi driver who has been thinking about making the switch to electric, as well as a tow truck operator who works for one of the only companies in the area certified to tow Teslas. They have to follow certain rules, like only transporting the cars at night and not allowing the cars to be seen outside of a maintenance shop. What incredible public relations foresight by Tesla!

Overall, the Minnkota EV opened many more hearts and minds this weekend, and it’s always a blast for me to assist in that awakening. And you know what’s cool? I get to do it three more times this week.

Bring on the rest of Drive Electric Week! I’m looking at you, Bemidji, Bismarck and Fargo!