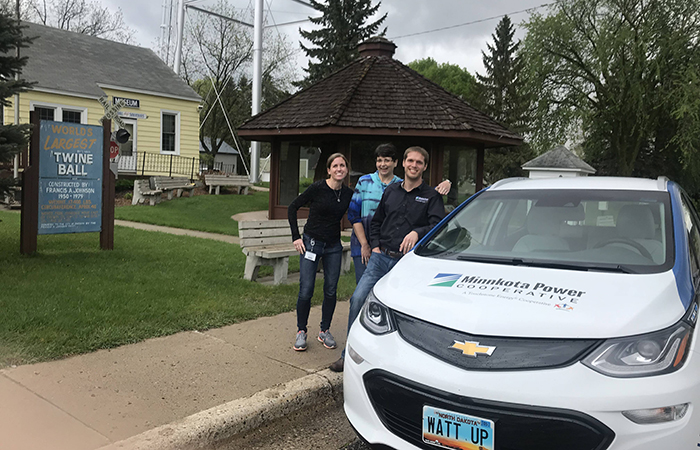 Minnkota’s Chevy Bolt has traveled a lot of miles over the past 10 months, but before last week, it had yet to make the journey south to the Twin Cities area. The opportunity finally arose, and Minnkota’s compliance team jumped on the chance to put the all-electric car to the test.

Andy, Theresa and Katherine left Wednesday morning for a conference in Bloomington, Minn., with a charging plan in hand and an anticipated 175 miles of range in the battery.

Their first stop was at the ZEF DC fast charger in Moorhead, Minn. They plugged in and grabbed a bite to eat at the nearby Qdoba (one of several eateries within a few yards) while they waited for their charge.

One lesson these EV newbies learned is that the fast charger only charges to 80% capacity before turning off, a precaution on many chargers to protect the longevity of the battery.

“We probably should have just been patient and given it another 30 minutes or so,” Theresa laughed. “Then we probably would have been smiling the whole way.”

Instead of smiling, the team was watching the green energy gauge nervously on their next leg to Morris, Minn., where another fast charger awaited them 110 miles away at the University of Minnesota’s West Central Research and Outreach Center (WCROC). They arrived with only 24 miles of range remaining.

“That place worked out really well,” Theresa said. “There really wasn’t a place to eat, but it was accessible, and on a nice summer day, there was a great walking area.”

“They were really nice!” Katherine added about the staff at the WCROC. “We were able to go inside and use the restroom.”

The team left Morris with a 90% full battery, but they weren’t beelining to Bloomington quite yet – the Bolt had some sightseeing to do in Darwin, Minn., home of the world’s largest ball of twine.

“It was the highlight of our trip,” Andy joked.

The trio wrapped up the fun and continued on to Bloomington with plenty of charge cushion, arriving at their hotel with approximately 40 miles of range to spare. However, they learned a lesson about researching posted public charging points online.

“We plugged in, and Andy noticed it wasn’t a true Level 2 charging station [as it was noted online], so he got concerned right away,” Theresa recalled.

They gave the charge a few hours, but realized the hotel’s charging station was only giving them 120 volts of juice. Instead of keeping the car on the charger, Andy decided to bring the Bolt to the closest DC fast charger at the local Goodwill. After about an hour and an $11 charge, the car was back to 80% full.

The following day, the Minnkota cohort was able to chat with conference attendees about the EV parked in the hotel lot. Many of the utility representatives already knew a lot about EVs (some having their own), but others had many questions. The Bolt’s vanity plate – WATT UP – was a crowd-pleaser.

At the end of the day, the three packed up the Bolt to head home. They planned to stay the night in Morris. Before they made their way there, they drove 35 miles to Wright-Hennepin Electric Cooperative in Rockford, Minn., where they made a one-hour stop for dinner and a $13 Level 2 charge to bring them back to a 90% full battery.

On this leg of the journey, the Minnkota crew didn’t take the interstate, which brought them through 19 small, Minnesota communities – a great way to show off the car, even if just for a moment.

“One of the advantages of driving through all these small towns along the highway is that there’s plenty of opportunity to slow down and then speed up. That was our favorite part!” Theresa said with a big smile. “To go through a small town, you have to drop down to 30 mph. The speed limit is 60 on the highway, so it was fun to accelerate … Andy and I giggled every single time!”

Katherine, who opted to play passenger for the trip, got a kick out of Theresa and Andy’s competitive driving techniques.

“They had a contest to see who could get the best [energy efficiency] score,” she said.

Along the road trip, the pilots became more comfortable with the unique shifter, the functions of the touchscreen, and the ever-adjusting power gauges. They loved the overhead-view backup camera but were not fans of the digital rear view mirror setting. The team utilized the heated seats and steering wheel to stay warm, which was all they needed for the 50-55 degree weather.

The plan was to check into their hotel in Morris and plug into a Level 2 charger at a nearby Chevy dealership for an overnight boost. However, that charger was occupied, so they took the car a half-mile up the road to Willie’s SuperValu to use the grocery store’s Level 2 charger. The car started charging with approximately 45 miles of remaining range. After a full night plugged in, it was ready to rip Friday morning with 233 miles of range.

The Bolt plugged into the Moorhead fast charger with 72 miles of remaining range. It was just another 80 miles to get back to Grand Forks, but the crew took a 50-minute driving break and brought the power back to 80%.

It was a little chilly on that final stretch, so they popped on the heat without a worry of draining precious kWh. The Bolt pulled into Minnkota headquarters Friday afternoon with 51 miles of remaining range, having travelled a total of 717.6 total miles over nearly 18 hours (driving and charging stops).

Theresa, Andy and Katherine said even though they ran into several challenges, they were glad they could be pioneers on this Minnkota “first.”

“You can know about electric cars, but the experience is entirely different,” Andy said. “You have to plan your trip and there’s definitely a range anxiety, even if you know you’re going to make it.”

“The charging infrastructure is getting there. Looking at the app, you can see there are lots of planned locations for chargers. So I would guess that in a year, if we were to take this same trip again, we would probably have a much different experience,” Theresa said.