The Bolt is back! 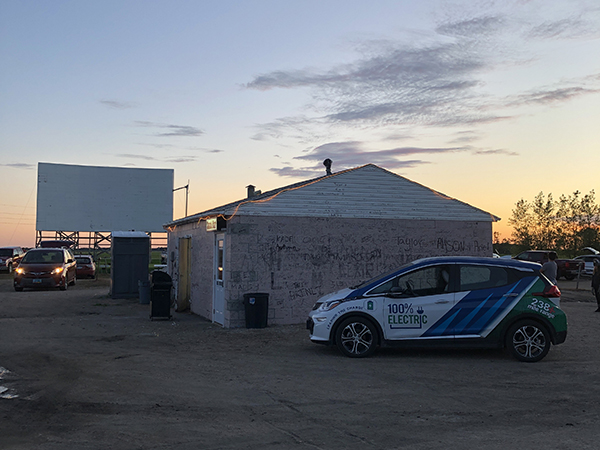 Folks, it’s been waaaaay too long since I’ve been able to hop into the Minnkota Chevy Bolt and take it on a road trip. The COVID-19 pandemic had me navigating some new office and travel guidelines for several months – work from home, travel only when necessary.

Well, last week I was finally able to reunite with Bolty, and it felt so good. I missed that battery-powered beauty.

For the kickoff of our Reunion Tour 2020 (tour dates pending), we would head to Warren, Minn., for a unique cooperative event. Our member co-op, PKM Electric Cooperative, had decided to hold its annual meeting in a healthy, safe, open-air fashion – at the local Sky-Vu Drive-In movie theater. How amazing is that?

I wanted to write about the event for our Minnkota Messenger magazine, so I recruited our digital media specialist and photographer extraordinaire, Michael, to accompany me. He hadn’t yet had the thrill of driving the EV, so you better believe I made him the pilot of the journey to the drive-in.

The last time the Bolt had been taken on the road, it was a lengthy 75-mph interstate drive on one of the coldest and windiest weeks of the winter (yes, it had been that long ago). The battery was only about 85-90% recharged, but the car still only had an estimated range of 134 miles.

Not great for poor Bolty, but I knew this sunny, minimal-wind day would make that range a nonissue. Driving conditions had certainly changed for the better.

I ran through a few of the initial controls with Michael before we headed out, and I could tell he was liking the feel of the car immediately. As we started to merge onto the interstate heading north, I told Michael it was a perfect opportunity to test the acceleration of the car. He did. He was surprised. Not much surprises Michael. The man is prepared for everything.

The drive was an easy 36-mile jaunt, and we arrived at the drive-in having only lost 18 miles of range. The Bolt's calibrations were bouncing back!

Before members began to roll in for the annual meeting, I spent some time asking the event’s coordinators questions for my story, but employees spent an equal amount of time asking me questions about the car. I loved it! I was back in the world of talking EVs!

I parked the car at a key location to spark discussion with attendees – right next to the dinner station of burgers, beans and potato salad (an open-air gathering means open-air cuisine, correct?). As is usually the case at events like these, I was often asked questions about the Bolt’s range, winter driving, and the future of EVs in the northern region between forkfuls of food. A couple of people were hoping for a test drive, but I had to explain that on that particular day, it was a drive-in event, and not a drive in and out event.

The annual meeting itself was fantastic. Members pointed their cars toward the big screen and tuned their radios to 93.1 to hear the cooperative’s president and CEO deliver all the essential business content of the meeting. When it came time for a motion, second or vote, it was delivered by car horn.

After the meeting wrapped, members and their families were invited to stay for that evening’s showing of “Jurassic Park.” As they waited for the sun to set, more curious car fans sought me out to discuss the Bolt. It was exciting to be able to tell people about all the new public fast charging opportunities that would be popping up in the Red River Valley over the next few months – in Grafton, Grand Forks, Hillsboro and Fargo. This raised some eyebrows, as many thought this technology would never get a foothold in our area.

In “Jurassic Park,” the great Jeff Goldblum delivers the line, “Life, uh, finds a way,” when talking about the return of dinosaurs. Well, EVs find a way, too. But I guarantee their rise will be more successful than that of a dinosaur amusement park.