The Bolt romps in Thompson 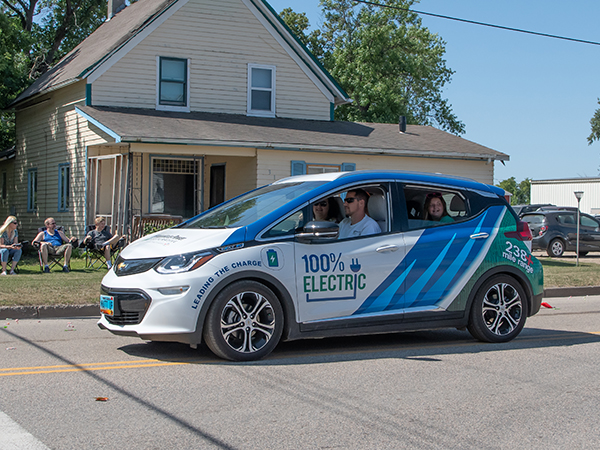 In small-town North Dakota, summer is the time for multi-day community festivals. These get-togethers celebrate the history of the town and set the tone for the community’s future. What better centerpiece for such a party than a parade!

That’s why Minnkota electronic technician Jerod Lupien decided to enter the Minnkota Bolt in the Thompson Days parade on July 10 – to show his community of 1,100 people the innovations in electric transportation.

“Thompson is home to many Minnkota employees, and the rural residents receive co-op electricity from Nodak Electric Cooperative,” Lupien said. “There are many families with young kids who are this country’s future leaders, and I felt exposing them to an electric car was a great idea.”

Lupien and his family of four filled the car for the short, square route around Thompson. The EV was a quiet addition to the stream of fire trucks, tractors and other boisterous floats in the parade.

“People were excited to see an all-electric car,” Lupien said. “I was posed with some questions that I didn’t know – but it made me wonder and want to learn more about the car, such as how the air conditioning works, where the heat comes from for the heater, and so on.”

The Minnkota Bolt will be on its way to more events through the summer (keep an eye out). It seems that in the smallest towns, it leaves the biggest impression.

“I appreciated the opportunity to try it and show it off in my community,” Lupien said.

MAIN IMAGE: Minnkota’s Jerod Lupien is joined by his family for a cruise through the Thompson Days parade.