Whipping up to Warsaw 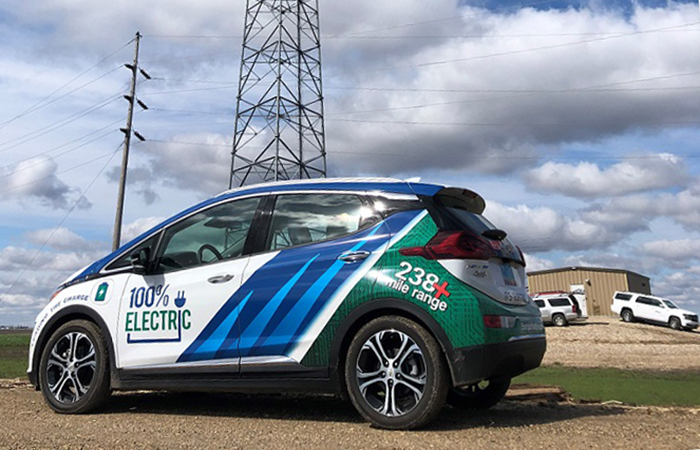 After heading south on Interstate 29 for an electric vehicle workshop on Wednesday, the Minnkota Bolt turned its sights north on the interstate on Thursday for a quick trip to the Warsaw substation.

Telecommunications engineers Alex Manz and Andrew Gass had to make the 33-mile trip to the small North Dakota community to test some of the substation’s SCADA (supervisory control and data acquisition) equipment. They figured, why not make the drive in style?

Manz said he decided to snag the Bolt because he really enjoyed the short test drive he took when Minnkota first added the car to the fleet. “I was curious how it would perform on a longer trip on the interstate,” he said.

The Bolt had no problem with the 75-mph cruise speed and Manz said he loved the quiet and comfortable ride that he could get on the highway. Things became trickier when the duo arrived at the rural route to the substation itself – they had to dodge a few cornstalks and tree limbs that had washed up on the road after some minor flooding.

The crews at the substation were curious as to how the small EV performed on the muddy gravel road. “It seemed to perform like most other sedans would, if not better,” Manz told them.

After their work was done, Gass took over driving responsibilities and the engineers made their way back to Grand Forks. Manz says that during the trip he realized that the EV would work really well for his daily commute, which is about 30 miles each way.

“It would be something I would consider in the future,” he said.