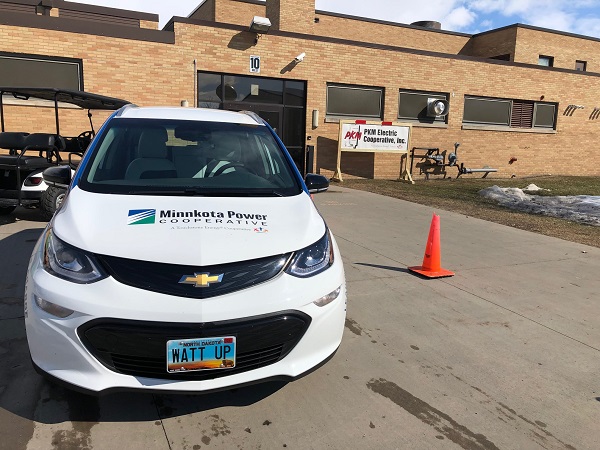 My pop-up banners were packed. My energy gauge was solid green. My podcasts were loaded.

It was Tuesday afternoon in April and that meant another opportunity to bring Minnkota's all-electric Chevy Bolt to a community's electric cooperative annual meeting, this time for PKM Electric. Yes, yes, YES!

The Bolt and I would be travelling to Warren, Minn., a fast and easy cruise to the northeast of Grand Forks. I was driving north into a steady northwest wind of about 25 mph, with gusts pushing past 35 mph. I was feeling it, with my steering wheel in a steady state of "just a little more to the left." The 960-lb. battery makes the Bolt bottom heavy and pretty solid on the highway, but it's still a small car – it's no tank.

My energy use held at around 25 kW as I continued north (that's high for a 55-mph speed), but as soon as I turned east to Warren, it let up to about 15 kW. I saw my efficiency gauge swing quickly from yellow to green. I was doing well before, but I was really ripping now!

I made it to the Warren-Alvarado-Oslo High School having only expended 11.1 kWh over 38 miles and still had well over three-fourths of my charge available. If I had a daily commute of 40 miles to work and 40 miles back, range anxiety would not be an issue, even in the middle of a Minnesota winter.

I parked the EV at the entrance of the school so members could check it out as they entered to register. However, with the cold wind still whipping, many were scurrying inside as quickly as possible. Luckily for them, I was waiting inside with electric vehicle handouts and EnergizeYourDrive.com sunglasses.

They always have time for the sunglasses!

PKM's annual meeting was like none I had attended so far. It was a formal meeting, yes, but it was draped in the fixings of a carnival. There was a magician, there were balloon animals, there was a face painter – it was a kid's dream! I thought about having a lightning bolt applied to my face, but there was no time. I had to educate the moms, dads and grandparents about the benefits of electric vehicles and why they should connect with their co-op for additional savings.

The face painting would have to wait.

PKM's meeting was a wonderful way to update the membership on the co-op's past year and featured guest speaker Darrick Moe, Minnesota Rural Electric Association president and CEO. Moe explained current energy efforts making their way through the state legislature, including a potential Conservation Improvement Program change that would better embrace the energy savings spurred from beneficial electrification. That includes electric vehicles!

The meeting was adjourned and more than 200 attendees flooded out of the auditorium and into the parking lot, where I was waiting with the Bolt. The wind had died down and they had a good dinner in their bellies, so people were ready to ask some questions! I chatted with a throng of people about the car as they poked their heads under the hood and gave the front seat a sit.

One PKM lineman who drove down from near the Canadian border for the meeting told me with a smile, "I don't know...I like squealing tires and a loud muffler." I responded that I couldn't help him with the noise (you can't even hear the Bolt running), but the car's acceleration would give him a wheel squeal without a problem.

After the crowd disbanded, it was time to roll out. I wasn't fighting as much of a wind, so my main concern was deer. Deer everywhere. Lots of them. I remained vigilant and arrived home safely, 23.2 kWh expended over 75 miles. Six percent of my battery power went to climate control, and the outside air temperature (in the 30s) is still making the battery work a little harder. But the EV is still performing like a beast, and I still get excited every time I get to take it out on the road.

Until next time – happy charging!