Bolt to the barbeque 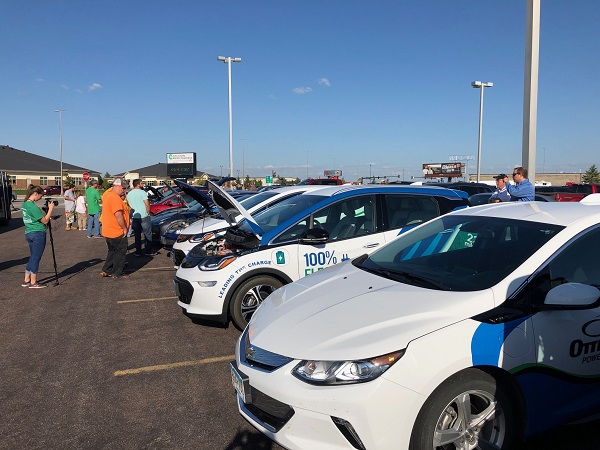 As I rolled my suitcase out to the Minnkota Bolt Thursday morning, a man outside the Bismarck Best Western noticed that I was the one driving the all-electric car plugged into the hotel’s charging station.

“How does that little thing run?” he asked curiously. I gave him a quick lesson on the inner workings of the EV, including a description of the battery pack and how charging works. When he asked how it handles, all I could think was this:

If you only knew how excited I am to be hitting the road in this car today.

It was a great start to the third and last day of my Drive Electric Week road trip. I checked the weather report and saw that I wouldn’t have nearly as much wind to battle this time around, making a much easier drive east to Fargo for Cass County Electric’s EV Tailgate Party that afternoon. I wouldn’t have to worry about my speed, climate control, anything! My charging stop in Jamestown would simply be a top-off to give me come cushion for the nearly 200-mile interstate drive.

Although the R.M. Stoudt Quick Lane had become my go-to Level 2 charging stop in Jamestown (right off the interstate and close to food and shopping), I decided to mix things up and try out the Level 2 charging station at the University of Jamestown.

I’m soooo glad I did.

You have to go a couple miles north into Jamestown to get to campus, but it’s worth it, especially this time of year. The buildings and grounds are gorgeous in the fall. The one-plug charging station is just across the quad from the library and a two-minute walk to the campus coffee shop – Java Hut. I plugged in, grabbed a London Fog and got some writing done.

Note: I asked around, and there is no non-student Wi-Fi access in the coffee shop, so either bring a book or a backup hot spot.

After some work and a quick walk around campus (I had to check it out), I was on the road again, 147 miles of range to take me less than 100 miles to the ZEF fast charging station in Moorhead.

I arrived at the fast charger well before the EV tailgate was supposed to start, because I wanted to get my charge in before any out-of-town guests came by to use it. As soon as I was done charging up to a nearly full battery (120 miles in about an hour), Sam, my co-op cohort from Beltrami Electric in Bemidji, pulled into the spot I just left with his Bolt.

After a run through the car wash to get rid of the bug graveyard that was my front bumper, I made my way to Cass County Electric for their EV bash.

Holy moly. What a fantastic event! People were flooding the cooperative grounds before the 4 p.m. start time, all hungry for some electric vehicles, prizes and southern-style food truck fare. The event brought in nearly a dozen EV owners and included some awesome plug-in rides from local dealerships, including models from Chevy, Nissan, Audi and Porsche.

Harley Davidson was there to talk about their new electric motorcycle, the LiveWire. For those who have been asking, the Fargo store will have one on the showroom floor in the next month and will start selling them in the spring. Start saving now – they’re about $30,000. Worth it.

Likely more than 300 people had the chance to ask car owners questions, tour the West Fargo Public Schools’ all-electric bus, take a spin in a Bolt and eat some tacos and brisket. With temps hitting 80 degrees, could you dream up a more perfect mid-September day?

My drive back north to Minnkota in Grand Forks was lovely. The sun was setting to my left, and I had 80 miles to reflect on what had been a whirlwind week of parades, car shows, panel discussions and community EV events.

Yep. This was a great National Drive Electric Week.