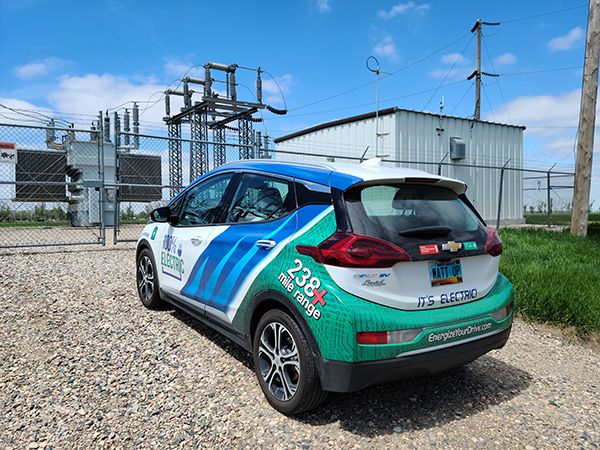 We’re not sure if the Minnkota Chevy Bolt has visited the MOST substations of any electric vehicle, but our Bolt sure has seen a lot of them. This week, the EV traveled to yet another substation in the Red River Valley, and the driver was brand new to the EV experience.

Minnkota substation CIP compliance analyst Bob Foote joined NERC compliance coordinator Andy Fuhrman for a quick mission to the Oslo substation, less than 30 miles north of Grand Forks. Andy had already taken the Bolt on a couple of trips (check out this experience to the Twin Cities), so he let EV newbie Bob take the wheel.

“I decided that my bucket list just needed to include driving an electric car somewhere, for some reason, and so this trip to Oslo made me feel as though I accomplished something!” Bob said. “The start was smooth and everything functioned normally as expected.”

As Bob merged onto Interstate 29, Andy urged him to accelerate a little more hastily than he typically would, so he could feel the torque and acceleration of the EV. “After that, I found the cruise and it was smooth sailing at 75 mph to Oslo,” Bob said.

The two arrived at the Oslo substation and completed their brief tasks, and it was time to hit the road once again back to the cooperative. Bob noted that the Bolt got some interested looks from drivers due to its splashy “100% ELECTRIC” design in blues and greens. The message of EV functionality was being sent loud and clear.

On the route back, Andy pointed out the intricate details in the dashboard graphics and how the heavy battery pack enhances the stability of the car. The compliance pros returned to the Minnkota fleet garage with plenty of battery power to spare. But it won’t be long before the Bolt will be out and about again – and Andy wants his turn back in the driver’s seat.

“I may need to go out to a few more subs in the next few weeks,” he said.

MAIN IMAGE: The Minnkota Bolt sits parked in front of the substation near Oslo, Minn.