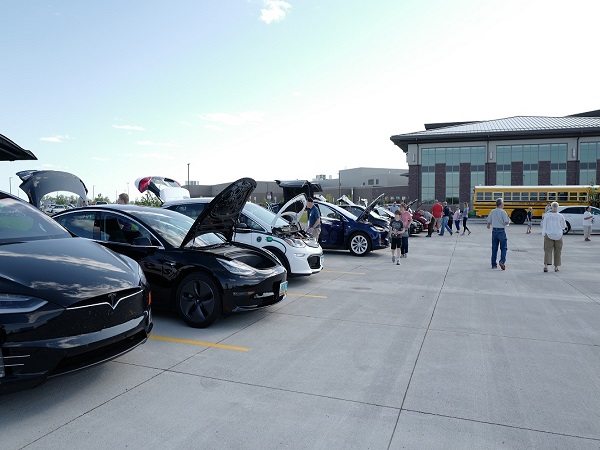 Thursday night was too much fun.

Minnkota and our member cooperative Nodak Electric co-hosted a full-blown celebration of electric transportation right here at our Minnkota Grand Forks campus. I’ve been to a few EV gatherings with the Minnkota Bolt over the last year or so and have always had a blast.

It was high time to take what I had learned and turn it into a big, plugged-in party.

The goal of the event was not only to introduce our community to the fun and savings of electric vehicles, but also to what electricity can power in terms of other transportation like school buses and bikes. But if folks aren’t naturally curious about these things, how do you get them to listen?

Throw in Michael J. Fox in an outdoor showing of one of the best movies of all time (sorry, Grumpy Old Men is still my top pick), and people will show up anywhere.

Our EV event – named Plugged In to the Future – followed the theme of transportation innovation like Doc Brown’s time-travelling DeLorean in Back to the Future. Instead of talking gigawatts, we were talking kilowatts. Instead of DeLoreans, we were embracing Bolts, Teslas and hybrids.

I reached out through a few networks to invite EV owners from around North Dakota and Minnesota to bring their babies (I mean, cars) to Grand Forks to show them off and answer questions for those new to EVs. I was hoping to have at least five or six make it. We welcomed double that, all of them happy to throw on an “Ask Me!” lanyard badge and explain the features of their cars to others.

One Tesla owner drove all the way from Dickinson, N.D., to meet up with other EV drivers and give a ride-along to those who had never experienced the power of Tesla’s “Ludicrous Mode.”

We’ll just say he was a hit with attendees.

Plugged In to the Future also featured West Fargo Public Schools’ all-electric Blue Bird school bus, supported in part by Minnkota. The bus is the first of its kind in the state and touts a 120-mile battery range with zero emissions, making for a quiet, smooth and fume-free ride for the students in the fall.

Bob from Cass County Electric Cooperative in Fargo brought up the cooperative’s Chevy Bolt and took guests on rides around town to get a feel for the car’s acceleration and handling. Scott from Drive Electric North Dakota came from Bismarck in WATTS the Tesla. He was ready to chat about the current landscape of public charging in North Dakota and what infrastructure opportunities are coming down the road.

From four wheels to two, Scheels brought out some electric mountain bikes for people to try out by cruising around the event space. I didn’t get a chance to hop on – devastating, I know – but the smiles I saw from the riders indicated they were pretty swell.

Our friends at Rydell Cars brought over a couple of their plug-in hybrid models to display (a Chevy Volt and a Honda Accord Hybrid) and fielded questions about EV availability and sales in the region. Nodak Electric and Border States answered queries about home charging systems and how to save money through cooperative incentives like off-peak charging and rebates.

The ice cream of the event was sweet, but the sprinkles on top brought it all together:

Yard games in perfect, sunny, 75-degree weather? You got it.

A choice of three local food trucks with everything from gyros to brisket to mac and cheese – for free? Yup.

Back to the Future on a 16-foot LED screen to round out the night, complete with freshly popped popcorn and candy? Of course.

More than 275 people took part in the fun of Plugged In to the Future, and I’m excited to see what our post-event survey results reveal about what they learned while they were here. I hope we were able to make attendees more comfortable with (and even excited about) a technology many of them see as pulled from a future time.

Thank you again to our event sponsors:

Until next time, remember: Gas? Where we're going, we don't need gas.