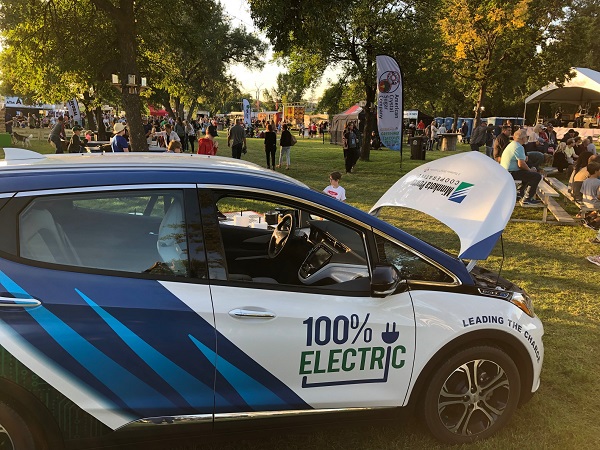 Oh man, 2019 was a fantastic year for electric vehicles. It felt like there was an announcement in the news every other day, between new public charging infrastructure, new programs to support EV adoption and new electric models to be released in the next couple of years (Tesla Cybertruck, anyone?).

But today, I want to reflect on the EV highlights that hit a little closer to home here at Minnkota. This year, I had the opportunity to be involved in so many great events, community discussions and road trips that made me appreciate our Minnkota Chevy Bolt and the growing family of EV owners and supporters around the region.

Let’s take a look at a Top 5 countdown of Minnkota’s best EV experiences of 2019. Get the tissues ready – it’s time to reminisce.

This is the second year the Minnkota Bolt has been a guest at Grand Forks’ Greenway Takeover Festival, a multiday celebration of music, art, food and community. I had a ton of families stop by to check out the car between yard games, mini donuts and grandstand acts. It was perfection.

Minnkota’s compliance team wanted to put the Bolt to the test in May, so they hopped in and drove it down to Bloomington, Minn., to attend a conference. As newbies to the technology, they learned their way through some charging challenges but ultimately had a fantastic time over their 717-mile journey – they took the photos to prove it!

This year, National Drive Electric Week took the Minnkota Bolt on a 745-mile trip to five events across Minnesota and North Dakota, including a parade, a car show, a ride-and-drive, an EV panel and a tailgating party. Could you pack more fun into one week?

My first trip to Bismarck and back was my biggest EV learning experience so far. I drove through some of the harshest winter conditions that North Dakota has to offer. Although I ran into a difficulty here and there (lessons learned!), the journey primed me better than anything else to tell people that electric vehicles can handle the deep freeze.

1) Plugged In to the Future

When Minnkota throws an electric transportation party, we do it big. Our Plugged In to the Future event featured EV drivers from around the region, an electric school bus, electric mountain bikes, food trucks, an outdoor showing of Back to the Future and SO MUCH FUN. Plus, our community learned about EVs. The warm, fuzzy feeling has yet to recede.